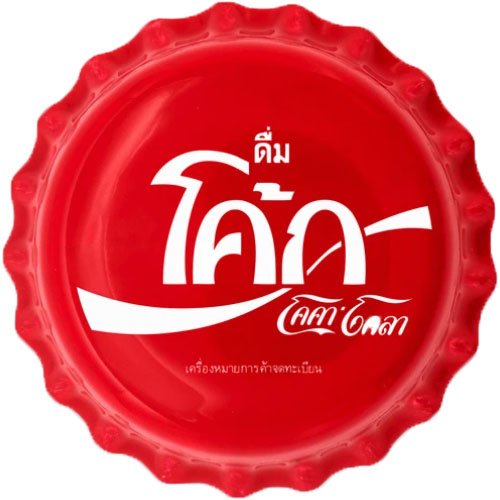 The 2018 release of the Fiji Coca-Cola Bottle Cap coins proved so popular that the collection returned in 2020 with a special twist. This time around, the Coca-Cola bottle cap coins don’t feature the English-language script lettering, but rather, the lettering from various different cultures around the world where you can find Coke bottles for sale on a daily basis. Right now, 2020 6 Gram Silver Fiji Coca-Cola Thailand Bottle Caps are available to purchase online at Silver.com.

Each of the 2020 6 Gram Silver Fiji Coca-Cola Thailand Bottle Caps available in this product listing come inside of a fabric display within a commemorative tin. The collectible tin has Thailand Coca-Cola script on its exterior and a Coke-shaped lid to the tin. The tins are housed inside of Coke-themed shipping boxes and come with an included Certificate of Authenticity from the mint.

The Global Edition Coca-Cola Bottle Caps are silver coins for sale on behalf of Fiji, a small Pacific Ocean nation. The series originated with the 2018 release of a Coca-Cola Fiji Bottle Cap with script designs in English. In 2020, the Global Edition debuted with scripts featuring different languages for various nations. The series started with a planned six designs for China, Israel, Korea, Russia, Japan, and Egypt. The series was expanded to a total of nine designs with the addition of Taiwan, Thailand, and Sri Lanka Coke caps.

The obverse of the 2020 6 Gram Silver Fiji Coca-Cola Thailand Bottle Caps bears a design of the Coke bottle cap as issued in Thailand. The script on this is colorized white against a classic Coke shade of red with all of the inscriptions in Thai, the official language of the Kingdom of Thailand.

On the reverse side of 2020 Silver Fiji Coca-Cola Thailand Bottle Caps is a vision of the coat of arms of Fiji. The national coat of arms features a quartered shield at the center depicting sugarcane, coconut palm, and bananas in the first, second, and fourth quadrants. The third quadrant includes a dove symbolizing peace. The shield includes a rampant lion with a cacao pod in its paws. The shield is quartered by the Cross of St. George, topped by an outrigger canoe, and supported on the sides by Fijian warriors.

If you have any questions when buying silver, Silver.com customer service is here to help you out. Our team is available on the phone at 888-989-7223, on the web through our live chat, and using our email address.