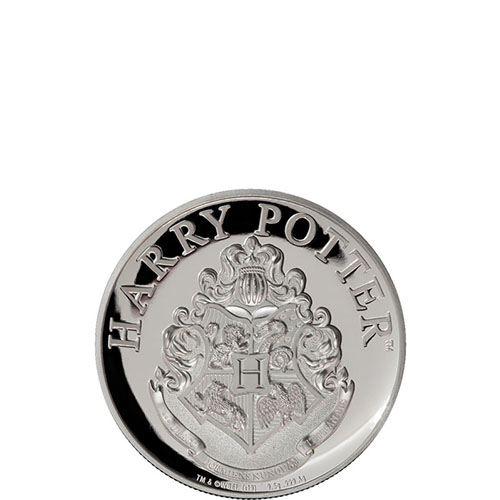 The School Crest of Wizardry Series of proof silver coins for sale depicts the crest of the Hogwarts School of Witchcraft and Wizardry on the reverse of one coin, along with four additional coins depicting the four houses of Hogwarts: Gryffindor, Slytherin, Hufflepuff, and Ravenclaw. Now, 2020 9.5 Gram Silver British School Crest of Wizardry Series Hogwarts Coins are available to you for purchase online at Silver.com.

Hogwarts School of Witchcraft and Wizardry is a school for all children aged 11 to 18 with magical abilities in their blood. This means that both pure-blood wizards from powerful, well-known families and those of muggle birth, or those with normal human parents, can attend the school.

The Hogwarts School of Witchcraft and Wizardry is set in Scotland in the novels of J.K. Rowling, with The Prisoner of Azkaban feature film referencing the city of Dufftown, Moray, Scotland being nearby. The giant castle has countless towers and battlements, but can only be seen by those with magic blood. A number of spells cast upon the building make it impossible for muggles to get a glimpse of the actual structure. Instead, they see only ruins when viewing the building.

The obverse side of 2020 9.5 Gram Silver British School Crest of Wizardry Series Hogwarts Coins features the right-profile portrait of Queen Elizabeth II. This special design shows the Queen with the George IV State Diadem Crown on her head. A part of the Crown Jewels, the George IV State Diadem was commissioned in 1820 and has an astonishing 1,333 diamonds within its design.

On the reverse face of the 2020 9.5 Gram Silver British School Crest of Wizardry Series Hogwarts is the official school crest. The broader Hogwarts crest has a quartered shield design with the animals of all four student houses depicted in the quadrants. From the first quadrant in the upper-left to the fourth quadrant in the lower-right, these animals are the Lion, Snake, Badger, and Raven.

These 2020 9.5 Gram Silver British School Crest of Wizardry Series Hogwarts Coins are available with individual presentation cards. The white cards have the Hogwarts crest in full color on one side and certificate information on the other. Coins in this listing arrive inside of the protective capsule, separate of the certificate card, and can be combined by the buyer. All items arrive together in a certificate card.

Silver.com customer service is available to answer your questions at 888-989-7223. We are also available on the web using our live chat and email address features.