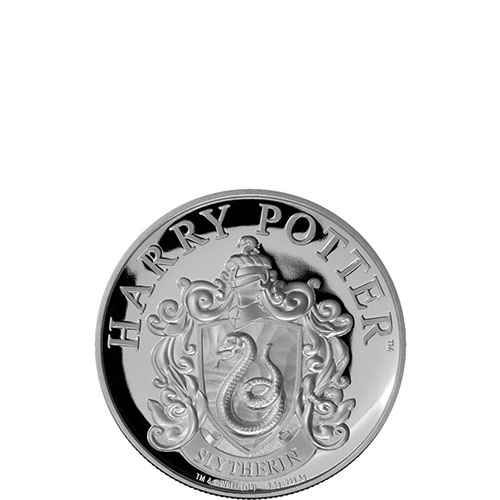 In the new School Crest of Wizardry Series, the houses that students live in while attending Hogwarts. This includes the houses of Gryffindor, Slytherin, Hufflepuff, and Ravenclaw. Each one of the houses is depicted with its house crest on a .999 pure silver proof coin in the latest Harry Potter Series of silver bullion coins. Right now, 2020 9.5 Gram Silver British School Crest of Wizardry Series Slytherin Coins are available to purchase online at Silver.com.

Each of the 2020 9.5 Gram Silver British School Crest of Wizardry Coins in this product listing come to you with beautiful proof visuals. These include frosted design elements and mirrored background fields. The individual coins in this series are housed inside of presentation cards that feature distinctive elements on each face. One side of the presentation card has a full-color visual of the House Slytherin crest, while the other side has the unique serial number of the coin and other certification information.

The resident houses of Hogwarts School for Witchcraft and Wizardry offer the students sleeping quarters and a common room. Slytherin was the house founded by Salazar Slytherin, one of the four founding members of Hogwarts. Unlike the other founding members, he believed that Hogwarts should only be open to those witches and wizards born of pure-blood family lines. It was his belief that teaching muggles, or half-bloods, how to use potions and spells would devalue the magical realm and all that it had to offer.

On the obverse side of 2020 9.5 Gram Silver British School Crest of Wizardry Coins is a depiction of Queen Elizabeth II. This image of Her Majesty featured on this side of the coin is a right-profile bust that shows the Queen wearing the George IV State Diadem Crown, a crown that includes a total of 1,333 diamonds in its setting that weigh more than 300 karats.

The reverse face of the 2020 Silver British School Crest of Wizardry Coin includes the House Slytherin crest. This crest includes the image of a snake at the center with a smaller snake on top of the head of the knight at the top of the crest.

If you have any questions about these silver coins for sale, please contact Silver.com. Our customer service team is available to you at 888-989-7223, online using our live chat, and through our email address.