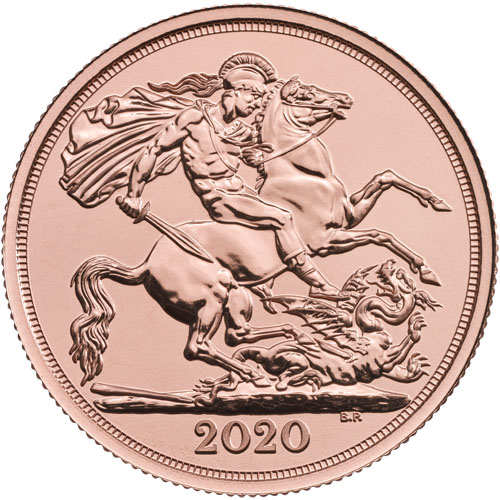 Any quantity available for $59.99 per coin over spot!

The Gold Great Britain Double Sovereign was first issued in 1820 by the Royal Mint, but those original strikes were considered pattern coins and never released for circulation. Pattern coins, known in early 20th century America as proof strikes, were meant to evaluate a design before its release into broader production. Right now, 2020 Gold Great Britain Double Sovereign Coins are available to purchase online at Silver.com.

Each 2020 Gold Great Britain Double Sovereign Coin available to you in this product listing comes with an individual flip. Each coin is offered here in Brilliant Uncirculated condition and marks the 200th anniversary of the first widespread issue of Gold Sovereign coins.

The Gold Sovereign was introduced in 1817 following the Great Recoinage Act of 1816. This movement during the reign of King George III resulted in the revival of a coin based on the English sovereign first issued in the late 15th century. The coins were not released as circulation coins with larger production figures until 1820, with 2020 marking the 200th anniversary of that movement.

The obverse side of 2020 Gold Great Britain Double Sovereign Coins includes the effigy of Queen Elizabeth II. This is the fifth-generation portrait of the Queen for British currency and it comes with the George IV State Diadem Crown on her head. This design was created in 2015 by Jody Clark and debuted on British coins with the 2016 date mark.

On the reverse face of 2020 Gold Great Britain Double Sovereign Coins is the classic St. George and the dragon design. Created in 1817 by Benedetto Pistrucci, this image features St. George on horseback as he slays a massive and powerful dragon with a spear.

The Royal Mint of England is one of the world’s oldest operating mints and can trace its roots as the kingdom’s sovereign mint to the 9th century and the reign of King Alfred the Great, the man credited with unifying the various kingdoms of England following decades of clashes with invading Danes.

If you have questions about gold for sale, you can contact Silver.com customer service. Please feel free to reach out to us at 888-989-7223, chat with us live online, or simply send us an email.