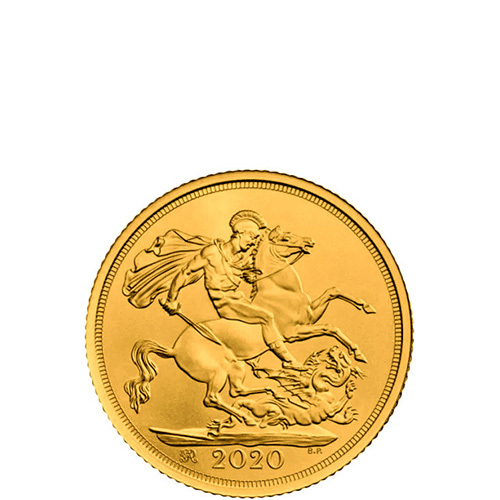 The premier form of gold for sale from the Royal Mint of England is the Great Britain Sovereign. Once recognized around the globe as a form of international currency for commercial transactions. During World War I, the Royal Mint had to suspend production of the coins, but as of 1957, the coins are back in production. Today, 2020 Gold Great Britain Sovereigns are available to you online at Silver.com.

Gold British Sovereign bullion coins have been issued as bullion specimens since 1957, early in the reign of Queen Elizabeth II. However, the coins were previously issued from 1817 to 1914 and are based on an English gold coin known as the English sovereign that was first struck in 1489.

Gold Great Britain Sovereigns are struck with 22-karat gold content and hold legal tender status within the United Kingdom. Each coin has 91.67% gold coin with 8.3% copper for balance. The Royal Mint of England issues the coins with an understood face value of One Pound sterling, but like the Gold South African Krugerrand, the coins do not have the face value inscribed on the specimen.

On the obverse face of the 2020 Gold Great Britain Sovereign, you will find the latest fifth-generation bust of Queen Elizabeth II. England’s longest-reigning monarch, Elizabeth II is featured in right-profile relief in this design that was created in July 2015 by Jody Clark. Just 33 years old at the time, Clark became the youngest artist to create a monarch’s portrait for English coinage in the history of the Royal Mint of England.

The reverse side of 2020 Gold Great Britain Sovereigns comes with the historic image of St. George and the dragon. St. George is shown on horseback with a short sword in his right hand as he rides over the dragon with his horse to eventually subdue and slay the beast. This design was created back in 1817 by Benedetto Pistrucci and has featured on the coins in the vast majority of issues since that time.

Please feel free to reach out to Silver.com if you have any questions. Our customer service team is available to you at 888-989-7223, online through our live chat, and via our email address.