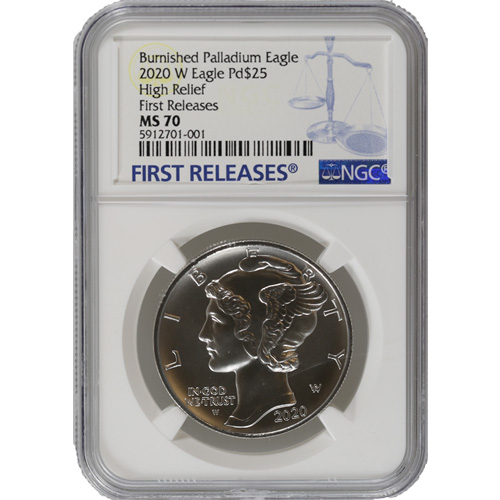 Introduced in 2017, the Palladium American Eagle has proven popular with investors and collectors based on the US Mint’s approach to striking the coin. Each year the coin has been released from 2017 to 2020, the US Mint has offered a different version of the coin with limited mintages. Now, 2020-W 1 oz Burnished Palladium Eagle Coins are available to you for purchase online in perfect condition.

The United States Mint first issued the Palladium Eagle in 2017. With a limited mintage of only 15,000 coins, this Brilliant Uncirculated version sold out quickly in the first year of issue. Rather than expanding the series to include a collectible version alongside the BU coin, the US Mint took the rare step of changing the version issued each year.

In 2018, the US Mint issued the Palladium Eagle as a traditional proof specimen with the same mintage of 15,000 coins. In 2019, the US Mint issued the coin as a reverse proof specimen with the highest mintage to date at 30,000 coins. The 2020 coin was the fourth issue and the fourth different version, having been released as a burnished coin. To date, the 2020 Burnished Palladium Eagle has the lowest mintage in the series at just 10,000 in total.

The obverse of 2020-W 1 oz Burnished Palladium Eagles features a left-profile portrait of Liberty known as Winged Liberty. This design from Adolph A. Weinman shows Liberty with a winged Phrygian cap.

On the reverse of 2020-W Burnished Palladium American Eagles is another design from Weinman. This one comes from the 1907 American Institute of Architect’s gold medal and showcases a bald eagle as it rests on the edge of a cliff clutching a small sapling in its talons.