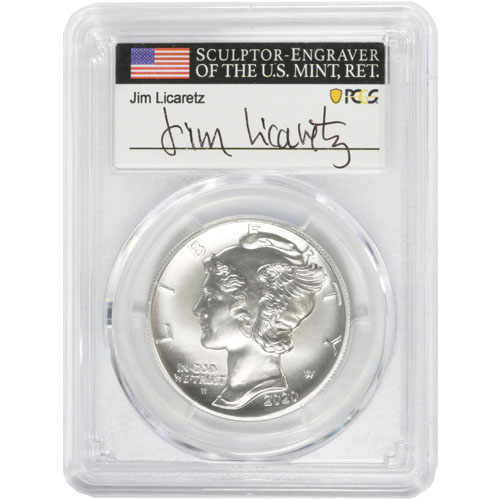 Palladium American Eagles debuted in 2017 at the US Mint, with the first release of the coin coming in a Brilliant Uncirculated version. In the subsequent years, the US Mint issued the Palladium Eagle as a traditional proof in 2018, a reverse proof in 2019, and these burnished coins in 2020. Mintage figures have been capped at low levels each year. 2017 and 2018 saw mintages of just 15,000 coins, while the 2019 coin had a mintage of 30,000 coins. These new burnished coins have the lowest mintage yet at only 10,000 coins.

All of these 2020-W 1 oz Burnished Palladium American Eagles are available in perfect condition at Silver.com. The PCGS issues the unique Specimen Proof 70 grade to coins that have full, original mint luster and no detracting flaws. The additional First Strike coin means the specimens were received for grading within 30 days following release from the US Mint.

On the obverse of 2020 Burnished Palladium American Eagles is the effigy of Winged Liberty. Designed by Adolph A. Weinman in 1916, this left-profile bust of Liberty depicts her figure with a winged Phrygian cap on her head. Weinman created this design for the US Mint to replace the Barber Coinage images, with this piece chosen to replace the US Dime image. It featured on the dime from 1916 to 1945.

The reverse side of the 2020-W 1 oz Burnished Palladium Eagle features a design with the American bald eagle. The bald eagle is shown perched on a rock as it uses its talons and beak to pull at a sapling growing within the rock. This design was also created by Weinman, but was developed in 1907 for the American Institute of Architect’s gold medal.

Please contact Silver.com with any questions you have about these coins. You can call our team members at 888-989-7223, chat with us live online, or email us directly.