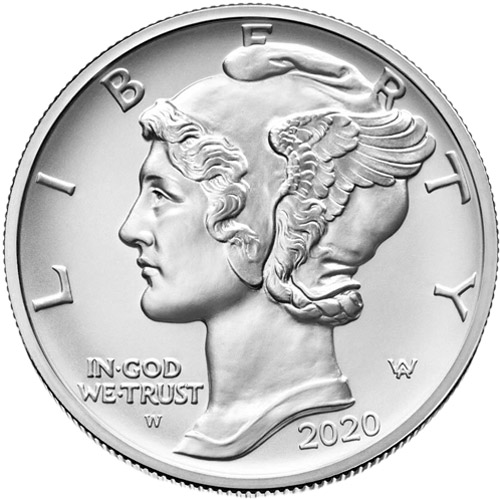 The Palladium Eagles debuted from the United States Mint in 2017. Authorized by Congress in 2010, the first Palladium Eagle issued in 2017 was a Brilliant Uncirculated specimen. Since then, the US Mint has issued the coin as a Proof specimen in 2018 and as a Reverse Proof specimen in 2019. Now, 2020 1 oz Burnished Palladium American Eagles are available as a fourth version in the series and are available to purchase online at Silver.com.

The all-new 2020 Burnished Palladium American Eagles present a clean, matte finish to the iconic Palladium Eagle designs. The burnished coins at the US Mint are produced by first rolling the blanks, before coining, inside of a drum with a polishing medium that cleans the blank’s field and leaves a matte finish. The blanks are then handled by gloved hands during removal from the drums and coining in the press.

Each coin is struck by the design die exactly one time and immediately packaged at the US Mint after coining. The mintage cap for the 2020 Burnished Palladium Eagle is the lowest to date in the series at just 10,000 coins. The 2017 BU coin and 2018 Proof coins had 15,000-coin mintages, respectively, with the 2019 Reverse Proof given a mintage cap of 30,000 coins.

The obverse side of the 2020 1 oz Burnished Palladium American Eagles bears the historic Winged Liberty design. The image was created by Adolph A. Weinman in 1916 as one of two submitted to the US Mint for consideration on circulation coins. The design shows Liberty in left-profile relief with a winged Phrygian cap on her head.

On the reverse face of the 2020 Burnished Palladium Eagles is a depiction of an American bald eagle. The majestic bird of prey is shown perched on a cliff edge with a small sapling clutched in one talon as its wings are raised behind its frame.

These 2020 1 oz Burnished Palladium American Eagles are available to you inside of individual protective capsules housed inside of grey leatherette presentation cases from the United States Mint. Additional details of the packaging include the heraldic eagle seal on the lid of the case and a Certificate of Authenticity from the mint.

Silver.com customer service is available to help answer your questions at 888-989-7223. We are also available to you online through our live chat or email address features.