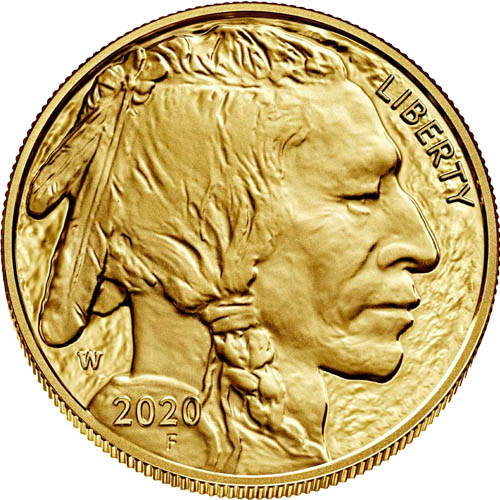 Proof Gold American Buffalos were introduced in 2006 by the United States Mint. This was the same year that the Gold American Eagle celebrated its 20th anniversary and the American Eagle Series ushered in a new burnished version. The Gold Buffalos have been available each year since that time with a bullion version and a proof version. Only the 2008 release featured adjustments to this series with three fractional-ounce versions of the Proof Gold Buffalo offered.

All of the 2020-W 1 oz Proof Gold American Buffalos in this product listing come with frosted visuals and mirrored background fields. The coin is housed inside of a capsule and set within a brown leatherette presentation case. The case has a flat surface shelf for the coin that can be propped up to display the coin while in the box.

James Earle Fraser created the right-profile bust of a stoic indigenous tribal figure on the obverse of 2020-W 1 oz Proof Gold American Buffalos. This portrait was designed by Fraser by combining the facial features of three leading Native American tribal elders of the early 20th century. The figure has a stoic look on his face with long, braided hair that has feathers woven in.

An American bison, better known as a buffalo, is depicted on the reverse of 2020-W Proof Gold American Buffalos. The animal design on this side is inspired by the figure of Black Diamond, a resident bison at the Central Park Zoo in New York City in the early 20th century.

Proof Gold American Buffalos are a product of the United States Mint and are struck by the West Point Mint with a “W” mint mark on the obverse side of the coins.

Please don’t hesitate to reach out to Silver.com if you have any questions. You can reach us on the phone at 888-989-7223, chat with us live online, or simply send us an email.