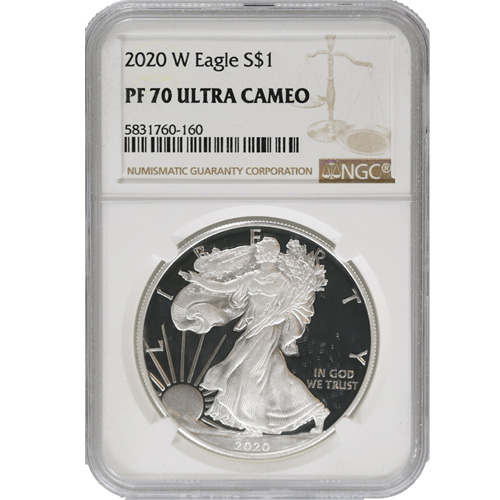 The Silver American Eagle Series from the United States Mint is not only one of the best-selling silver bullion coins in the world, it also boasts one of the best-selling proof collections in the world as well. The Proof Silver Eagle is so popular that its annual mintage figures often outpace other major BU silver programs. Now, 2020-W 1 oz Proof Silver American Eagles are available to you for purchase online at Silver.com in perfect condition.

Silver Eagles were introduced by the United States Mint in 1986. That year featured the debuts of the Brilliant Uncirculated and Proof versions of the coin. While proof coining originally had mintage limits, the US Mint rarely places a maximum on the Proof Silver Eagle in any given year. In 2006, a third option was introduced in the form of a collectible Burnished Silver Eagle.

Walking Liberty is found on the obverse of 2020-W 1 oz Proof Silver American Eagles. This design comes from Adolph A. Weinman and was created in 1916. It featured on the half dollar from 1916 to 1947.

The heraldic eagle of the United States features on the reverse of the 2020-W Proof Silver Eagle. This image was modernized in 1986 for this series by John Mercanti. Mr. Mercanti retired from the United States Mint in 2010, having served his final four years with the US Mint as the 12th Chief Engraver of the US Mint.

These 2020-W 1 oz Proof Silver American Eagles are available to you in perfect condition. A PF70 coin showcases full, original mint luster with no detractions. The included UCAM label stands for ultra-cameo and refers to the presence of strong, frosted designs with deeply-mirrored, clear background fields.

Silver.com customer service is available to assist you at 888-989-7223. We are also available on the web using our live chat and email address features.