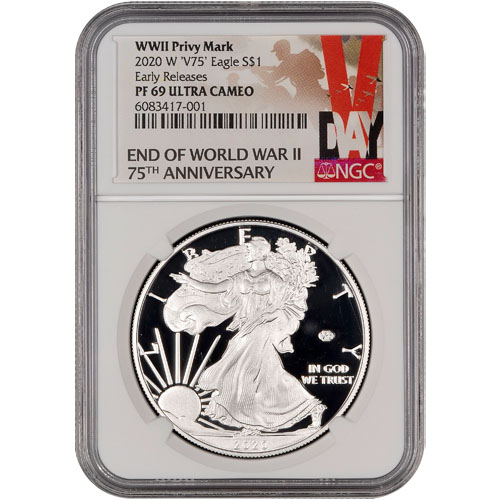 The Proof Silver Eagle from the United States Mint is rarely issued with privy marks or other alterations to its imagery, but the 2020 release came with a special privy mark honoring one of the most important events in American history. A limited release of 2020 Proof Silver Eagles included End of World War II 75th Anniversary privy marks on the obverse. Right now, 2020-W 1 oz V75 Privy Proof Silver American Eagles are available to purchase online at Silver.com in perfect condition.

Each of the 2020-W 1 oz V75 Privy Proof Silver American Eagle Coins in this product listing comes with a perfect PF70 certification from the NGC. Coins in this condition exhibit full, original mint luster and have no detracting flaws of any kind on the design elements or background fields. The coins also have Early Release labels that denote the arrival of the coins at the NGC within 30 days of release by the US Mint.

The Proof Silver Eagles in this product listing come with a unique privy mark on the obverse field. The privy mark is shaped like the Rainbow Pool on the National Mall in Washington DC. Inside the privy mark, you will find an inscription of “V75.” The Rainbow Pool was integrated into the World War II Memorial when the latter was built in 2001.

Obverse design elements of the 2020-W 1 oz V75 Privy Proof Silver American Eagle include Walking Liberty. Designed by Adolph A. Weinman, this image features Lady Liberty in left-profile relief walking toward the sun on the horizon with her right hand outstretched and the American flag draped over her shoulders.

On the reverse side of 2020-W 1 oz Proof Silver American Eagles in this listing, you will find the modern heraldic eagle of the United States. Created by John Mercanti in 1986, this version has a powerful American bald eagle with the US national shield on its chest, the arrows of war in one talon, and the olive branch of peace.

America was pulled into World War II in December 1941 when Imperial Japan bombed the Pacific Fleet at Pearl Harbor in Hawaii. After four years of war, the United States emerged victorious as the only nation to win a two-front war by assisting in the defeat of Nazi Germany by May 1945 and defeating Imperial Japan in August 1945.