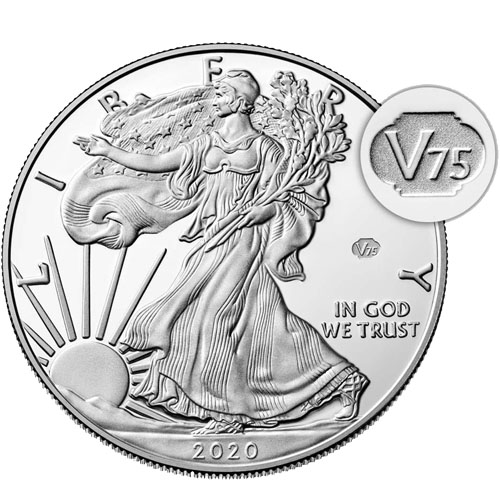 On May 8, 1945, the guns of war fell silent in Europe as America and her allies emerged victorious against Nazi Germany in World War II. Three months later, on August 15, 1945, the guns fell silent in the Pacific with the American defeat of Imperial Japan. 2020 marks the 75th anniversary of the war’s conclusion and the United States Mint marks this somber occasion with a new privy mark. The Rainbow Pool privy mark is featured on the Proof Silver American Eagle. Now, those 2020-W 1 oz V75 Privy Proof Silver American Eagle Coins are available to you for purchase online at Silver.com.

The summer of 2020 will come with somber celebrations marking the end of World War II. America’s greatest generation answered the call when the world was in need. The National Mall in Washington D.C. gained a beautiful memorial to this catastrophic conflict in 2001 when the new memorial was built near the historic Rainbow Pool.

Rainbow Pool was built in 1924 and designed by Frederick Law Olmsted Jr. The pool is situated between the reflecting pool at the Lincoln Memorial and 17th Street NW. it was integrated into the World War II memorial to provide a somber place to recall the bravery and sacrifice of the Greatest Generation. The Rainbow Pool serves as the shape for the privy mark on these special Proof Silver Eagles.

The obverse of the 2020-W 1 oz V75 Privy Proof Silver American Eagles includes Walking Liberty. Shown in left-profile relief as she walks toward the sun on the horizon, Walking Liberty was designed in 1916 by Adolph A. Weinman.

On the reverse field of the 2020-W 1 oz V75 Privy Proof Silver Eagle is a depiction of the heraldic eagle. The design was created in 1986 by John Mercanti and features the American bald eagle in front-facing relief with the US shield on its chest, arrows of war in one talon, and the olive branch of peace in the other.

These 2020-W 1 oz V75 Privy Proof Silver American Eagles are available with protective plastic capsules and a flip-top presentation case. The blue US Mint case has a blue velvet-lined interior. The coins come with a Certificate of Authenticity and ship inside of a themed shipper.