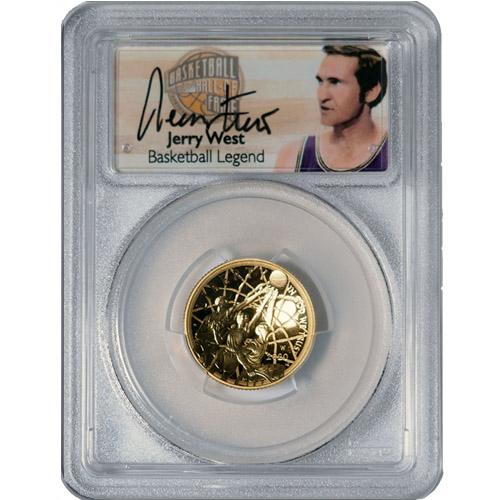 The release of Naismith Memorial Basketball Hall of Fame commemorative gold coins in 2020 at the US Mint included a variety of options. The series offered coins in denominations of $.50, $1, and $5, with clad, proof silver, proof gold, and burnished gold options in those respective denominations. The $5 coins came in the latter two options of proof gold and uncirculated gold. Now, certified-perfect 2020-W $5 Gold Basketball HOF Coins are available to you for purchase online at Silver.com.

The coins in this listing come with a special Jerry West label inside the slab. West was inducted into the Naismith Memorial Basketball Hall of Fame in 2010 along with his teammates from the 1960 U.S. Olympic gold medal basketball team. West is also one of the most accomplished NBA players, coaches, and executives in league history.

Drafted by the then-Minneapolis Lakers in 1960, West played his entire career with the Los Angeles Lakers. He spent a brief period coaching the team in the late 1970s before moving into the front office. As a player with the LA Lakers, he would win one NBA Title, but he would go on to earn six more NBA Titles as an executive in the Lakers front office.

The obverse side of 2020-W $5 Gold Basketball HOF Coins comes with an image of players working to get into position to rebound a basketball. This side of the coin has a net background design element with a concave, or sunken, field.

On the reverse of 2020-W $5 Gold Basketball HOF Coins, the US Mint features the image of a basketball going into the hoop. The design element on this field is struck on a domed surface, giving the impression of greater 3D depth and realism for the ball.

These 2020-W $5 Gold Basketball HOF Coins are available with a perfect certification from the PCGS. Coins listed here have a PR70 grade, indicating that each one showcases full, original mint luster and has no detracting flaws of any kind. The DCAM designation stands for deep-cameo and points to the strong, frosted designs and deeply-mirrored, clear fields. The particular gold proof coins have 90% gold content with 6% silver and 4% copper to balance. As a First Day of Issue coin, these specimens were received by the PCGS within 24 hours of the US Mint’s release.

Silver.com customer service can assist you with questions about gold for sale at 888-989-7223. You can also chat with us live online or email us directly.