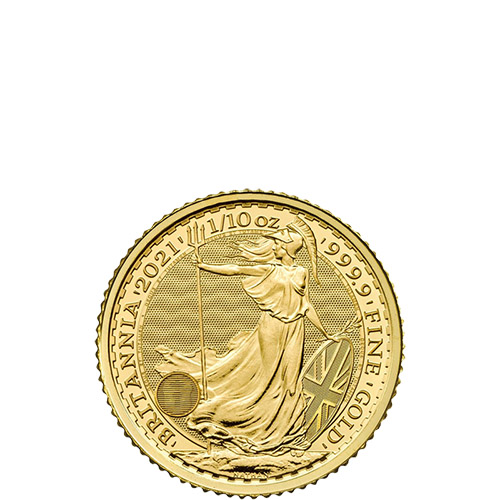 Any quantity available for $37.99 per coin over spot!

In 1987, the Royal Mint of England introduced its national bullion coin collection known as the Britannia Series. The series launched with four weights in the gold bullion series, and expanded over time to include a silver series in 1997 and a platinum series in 2018. As of 2013, the Gold Britannias come in a total of six weights, with the 1/10 oz gold coin among the smallest and most affordable. Today, 2021 1/10 oz Gold British Britannias are available to you online at Silver.com.

All of the 2021 1/10 oz Gold British Britannias in this product listing are available to you individually or in multiples of 25 coins. Individual coins ship inside of protective plastic flips, with multiples housed in plastic tubes. All coins are in Brilliant Uncirculated condition.

On the obverse of 2021 1/10 oz Gold Britannias is the latest effigy of Queen Elizabeth II to grace British currency. This right-profile portrait was designed by Jody Clark and unveiled in July 2015. It depicts England’s longest-reigning monarch in right-profile relief with the George IV State Diadem Crown on her head. The background includes the guilloche design element from the Royal Mint as well.

The reverse field of 2021 Gold British Britannias comes with a modern effigy of Britannia. The female personification of Britain, Britannia’s name has been used over the centuries to describe the region as a Roman province, to refer to the Britons as a people, and most recently as the female personification of the country. She is depicted along a coastline with a trident in her right hand to control the seas, an olive branch in her left hand symbolizing a desire for peace, and a shield at the ready to defend the British Isles.

Please contact Silver.com if you have any questions. You can call our team at 888-989-7723, chat with us live online, or via our email address.