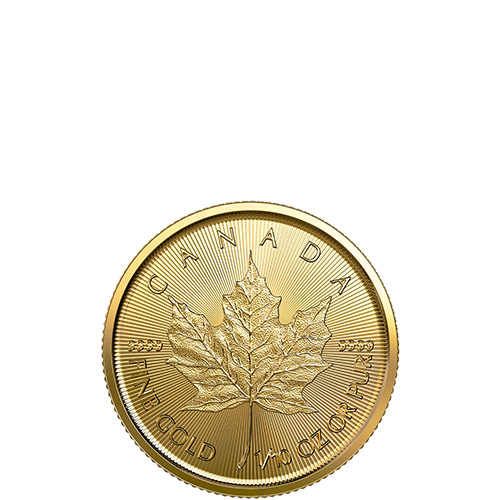 The Royal Canadian Mint introduced its Gold Maple Leafs in 1979. The series was just the second of its kind to become widely available when it debuted in 1979. When it was released, investors only had one option when it came to 1 oz gold, the Gold South Krugerrand. The Austrian 100 Corona was also available, but was of lesser gold content and not as widely available.

When the Royal Canadian Mint introduced the Gold Canadian Maple Leaf in 1979, the only other options to private investors looking to buy gold were the Gold South African Krugerrand and the Austrian 100 Corona gold coin. The latter was a .900 gold coin not widely available around the world. The Krugerrand, previously available around the world, was under an economic boycott in Western nations as a result of South Africa’s apartheid system. As such, more sovereign mints in the West began to introduce gold bullion coins.

All of the 2021 1/10 oz Gold Canadian Maple Leafs offered here today come in Brilliant Uncirculated condition. The coins in this weight in the series will ship either inside of protective plastic flips or arrive in a sealed sheet of 40 gold coins.

On the obverse side of 2021 1/10 oz Gold Canadian Maple Leafs is the image of Queen Elizabeth II. The longest-reigning monarch in the history of England, Elizabeth II has featured on Canadian coins since late 1952. Her Majesty’s effigy as shown here is the fourth-generation bust of the Queen and depicts her at the age of 79. It was created in 2003 by Susanna Blunt and adopted on the Gold Maple Leafs in 2005.

The reverse face of the 2021 Gold Canadian Maple Leafs features the depiction of a sugar maple leaf. Long used as an emblem of Canadian outposts, villages, and territories, today the sugar maple leaf is the national emblem of Canada and famous features at the heart of its national flag. The design shown here comes from Walter Ott and was designed in 1979 for this series.

Please feel free to reach out to Silver.com with any questions you have about these coins. Our team is available on the phone at 888-989-7223, online using our live chat, and via our email address.