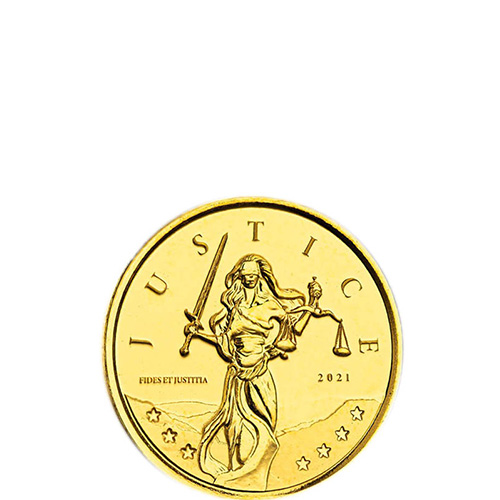 The image of Lady Justice is one that billions have seen over the course of human history. While she is based on Roman and Greek goddesses of justice, physical representations of the female figure were first produced in the 1st century AD during the reign of Augustus as Emperor of the Roman Empire. Today, she remains a visible figure within the judicial systems of Western nations and other democracies around the world. Now, 2021 1/10 oz Gold Gibraltar Lady Justice Coins are available to you for purchase online at Silver.com.

From the reign of Augustus onward, Lady Justice was a prominent female allegory within the empire and justice was a celebrated virtue of Roman culture. Following Augustus, the emperor Tiberius built the Temple of Iustitia in Rome in honor of Lady Justice. Vespasian would later mint coins with the image of the female allegory seated on a throne.

Lady Justice is always depicted with a variety of common symbols that have different meanings. For example, the blindfold she wears is a symbol of the perceived impartiality of the justice system. The scales she holds reflect the competing points from either side of an argument. The sword she wields is a symbol of the swift and sometimes deadly nature of justice.

On the reverse field of 2021 Gold Gibraltar Lady Justice Coins is a depiction of the female allegory. She is shown in front-facing relief with a sword raised in his right hand and scales in her left. She is shown wearing a robe with a blindfold covering her eyes. The design offers a mountain range beneath her feet with seven stars on the field.

Silver.com customer service is available to assist you when buying gold on the phone at 888-989-7223. Our team is also available online using our live chat and email address features.