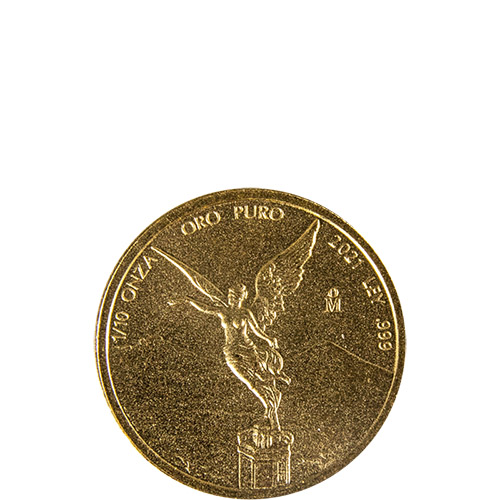 The only major gold bullion coin offered by the Mexican Mint each year is the Gold Libertad. Introduced in 1981 with 1 oz, 1/2 oz, and 1/4 oz options for investors, the series was put on hold for a decade before returning in 1991. When it did, the Mexican Mint offered the coins with additional 1/10 oz and 1/20 oz gold weights. Today, 2021 1/10 oz Gold Mexican Libertads are available to you online at Silver.com.

All of the 2021 1/10 oz Gold Mexican Libertads available to purchase in this product listing come in Brilliant Uncirculated condition from the Mexican Mint. The coins are available to you inside of individual plastic flips whether you purchase one or multiple coins.

On the obverse side of the 2021 Gold Mexican Libertads is a depiction of the Mexican coat of arms. This is the modern version of the national seal and depicts a Mexican golden eagle battling with a serpent. The duo is set upon the perch of a prickly pear cactus with a wreath of oak and laurel below. The design of the national coat of arms is based on Aztec lore that states the people of the Aztec Empire were directed to found the city of Tenochtitlan, modern-day Mexico City, upon the site where they saw a golden eagle devouring a snake.

The reverse face of 2021 1/10 oz Gold Libertads shows Winged Victory. This three-quarter profile depiction of Winged Victory is based on the actual statue of Victory from the top of the Mexican Independence Victory Column and was modified for use on the Gold Libertads in 2000. The background field depicts the mountain peaks of Popocatepetl and Iztaccihuatl, active volcanic peaks outside of Mexico City.

Please feel free to reach out to Silver.com with any questions. Our team is available to field your calls at 888-989-7223, chat with you live online, or respond to your written inquiries via email.