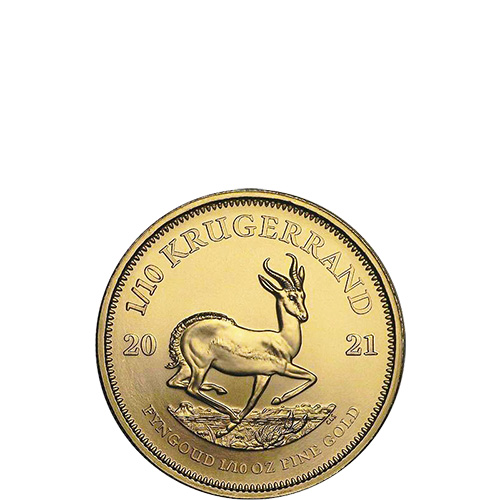 The gold coins for sale in the Krugerrand Series date back to 1967 when the 1 oz coin was introduced. The series has expanded twice since that time with a 1980 debut of fractional-ounce coins and two more fractional-ounce coins added in 2017. The 1/10 oz coin remains one of the smallest weights in the series and is an affordable option to gold investors when gold prices soar.

As the only major 1 oz gold coin available to investors for more than a decade, the Gold Krugerrand established itself as the dominant gold coin in the minds of investors. This would stick through the late 1980s. By 1980 when Western nations began to boycott South Africa’s economy, and the Krugerrand as a result, because of apartheid, the Gold Krugerrand accounted for 90% of the global gold bullion coin market.

Though nations began to boycott South African goods, the Krugerrand continued to grow in popularity through the mid-1980s. From 1974 to 1985, 22 million Gold Krugerrands were sold in the United States alone. In late 1985, the US joined the embargo and banned the import of Gold Krugerrands. In 1984, before the ban took full effect, some $600 million in Krugerrands were sold in the US. Even though the ban was lifted in 1991, the number of competing gold bullion coins resulted in lower numbers of the coins sold.

The reverse side of the 2021 Gold South African Krugerrands includes a vision of the Springbok antelope. The antelope is native to southern Africa and this design from Coert Steynberg originally appeared on the 1 Pound Gold South African Coins following the Union of 1910.

These 2021 1/10 oz Gold South African Krugerrands are available to purchase individually inside of protective plastic flips or inside of original mint tubes of 50 coins. All coins are available in Brilliant Uncirculated condition.

Silver.com customer service is available to assist you with questions at 888-989-7223. Alternatively, you can contact us online using our live chat and email address features.