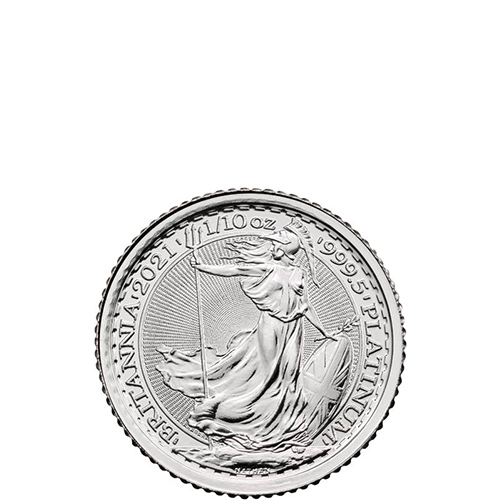 For more than 2,000 years now, Britannia has been a figure and term associated with the people of Britain. Early Britons who fought back against the Roman Empire’s expansion onto the islands of the British Isles were colloquially referred to at times as Britanni, while the province the Romans eventually established on the island was known as Britannia. In the 17th century, Britannia appeared on British-issued coins for the first time and her figure has been on British coins since the union of the crowns of England and Scotland in the early 18th century.

British Britannias are the official bullion coins of modern Britain. The series debuted in 1987 with the release of the Gold Britannias. One decade later, the series expanded to include the Silver Britannias. It was another 21 years until another expansion with the 2018 debut of the 1 oz platinum and these 1/10 oz Platinum Britannias.

The obverse side of 2021 1/10 oz Platinum British Britannias includes an effigy of Queen Elizabeth II. Her Majesty features in right-profile relief in the fifth-generation portrait used on British coins. Designed in July 2015 by Jody Clark, this portrait of the Queen captures the monarch at the age of 89.

On the reverse face of 2021 Platinum British Britannias is artwork depicting Britannia. Designed in 1987 by Philip Nathan for the debut of the Gold Britannias, this image of Britannia cuts a powerful figure standing along the coast of Britain as she guards the isles.

These 2021 1/10 oz Platinum British Britannias are available individually inside of plastic flips, with multiples packaged in tubes of 25 coins or boxes of 500 coins. The Monster Box features 20 tubes of 25 coins. All coins are in Brilliant Uncirculated condition.

Silver.com customer service is available to assist you at 888-989-7223. You can also chat with us live online or simply send us an email with your inquiries.