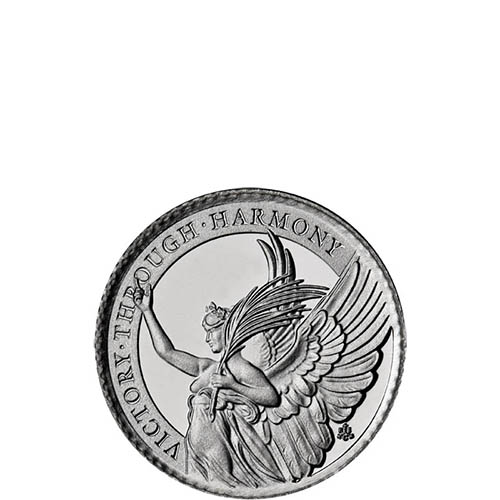 The image of the Winged Angel of Victory is the most prominent in the Victoria Memorial. Erected in London outside of Buckingham Palace after the death of Queen Victoria, the memorial is topped by the angelic figure of Victory. Surrounding her on the memorial are five other figures.

While the Winged Angel of Victory is at the top, Courage and Constancy crouch near her feet. Beneath these figures, carved into the base of the memorial, are Justice, Truth, and Charity. Taken together, these six figures make up the Queen’s Virtues.

The obverse side of 2021 1/10 oz Platinum St. Helena Queen’s Virtues Victory Coins comes with a bust of Queen Elizabeth II. Designed by Raphael Maklouf in 1985, this portrait of the Queen graced British coins from 1985 to 1997. The effigy captures an idealized image of Her Majesty with the George IV State Diadem Crown on her head.

On the reverse field of 2021 Platinum St. Helena Queen’s Virtues Victory Coins is a depiction of the Winged Angel. Victory stands in left-profile relief with her right hand raised in the air and her left hand clutching a palm branch that symbolizes peace. Victory is one of the most important virtues of the Queen.

Silver.com customer service is here to assist you with inquiries at 888-989-7223. You can also connect with us online through our live chat and email address features.