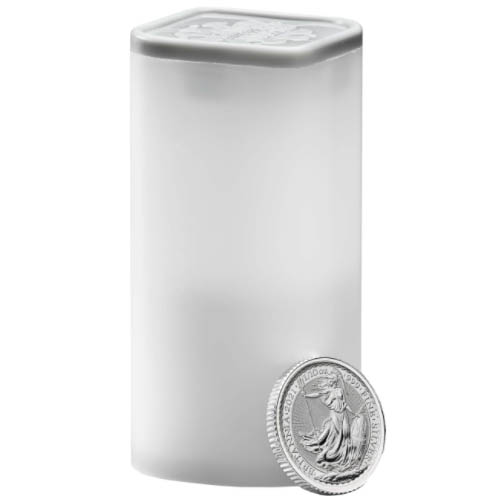 Each 2021 1/10 oz Silver British Britannia Tube available in this listing comes with a total of 16 coins. The coins in this tube are all 2021-dated specimens and each is in Brilliant Uncirculated condition. The term BU is used for coins that have never been circulated, but that may feature common flaws resulting from the coining process, such as breaks in the luster or other minuscule flaws. You can also purchase 20 of these 2021 1/10 oz Silver Britannias in a Monster Box that holds 320 silver coins.

The obverse of 2021 1/10 oz Silver Britannia Coins in this tube of 16 coins features the portrait of Queen Elizabeth II. Her Majesty is shown here in right-profile relief with the George IV State Diadem Crown on her head. This effigy was created in 2015 by Jody Clark. Just 33 years old at the time, Mr. Clark became the youngest Royal Mint Artist to ever create a monarch portrait for the mint.

On the reverse side of 2021 Silver British Britannias is a depiction of Britannia. Her effigy is captured in a left-facing design with her body front-facing. Her left hand holds an olive branch as it rests on a shield with the Union Jack. She wears a Corinthian helmet on her head. Her right hand clutches a trident that she uses to defend the realm by controlling the seas.