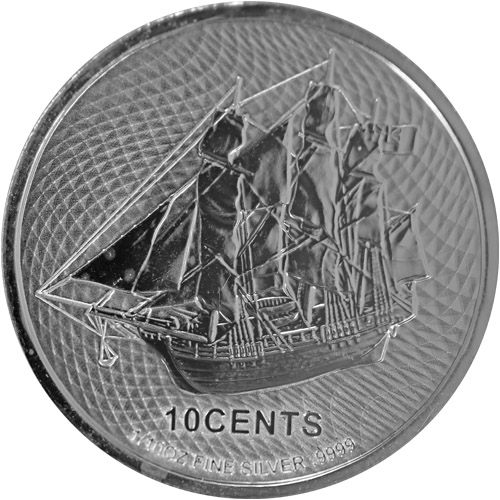 If you were to discuss a ship known as the Bethia with people today, few would have any idea what you’re talking about. However, if you talk about the shape using the name it was given during its service with the Royal Navy, you would undoubtedly know about the infamous mutiny that occurred on the ship in the South Pacific. Right now, 2021 1/10 oz Silver Cook Islands Bounty Coins are available to purchase online at Silver.com.

Each 2021 1/10 oz Silver Cook Islands Bounty Coin is available to you for purchase individually or in bulk. Individual coins will ship to you in protective plastic flips, while multiples of 20 coins will ship in acrylic tubes. The coins in this listing are available in Brilliant Uncirculated condition.

The HMS Bounty was commissioned in 1784 as the Bethia and intended for use as a private merchant vessel. The ship fulfilled that role for three years before being sold to the Royal Navy in May 1787. The Royal Navy purchased the ship and outfitted it for a special scientific expedition to the South Pacific.

The obverse side of 2021 Silver Cook Islands Bounty Coins comes with an effigy of Queen Elizabeth II. Her Majesty is featured here in right-profile relief wearing the Girls of Great Britain and Ireland Tiara. Designed in 1998 by Ian Rank-Broadley, this effigy of the Queen was created as the fourth-generation portrait for use on British coins from 1998 to 2015.

On the reverse field of 2021 1/10 oz Silver Bounty Coins is a depiction of the infamous ship. The HMS Bounty was sent on a mission known as the breadfruit expedition in 1787. The concept behind the mission was to harvest breadfruit plants from Tahiti to transplant to the colonies of Britain in the Caribbean.

The HMS Bounty spent several months on the island of Tahiti, during which time many of the crewmembers found love with native Tahitians. Rather than return to Britain or go to the Caribbean, most of the crew launched a mutiny to take over the ship and avoid leaving the South Pacific. The ship was eventually scuttled off Pitcairn Island to hide its location.

If you have questions about silver coins for sale, Silver.com has answers. Our team is available to assist you at 888-989-7223, online using our live chat, and via our email address.