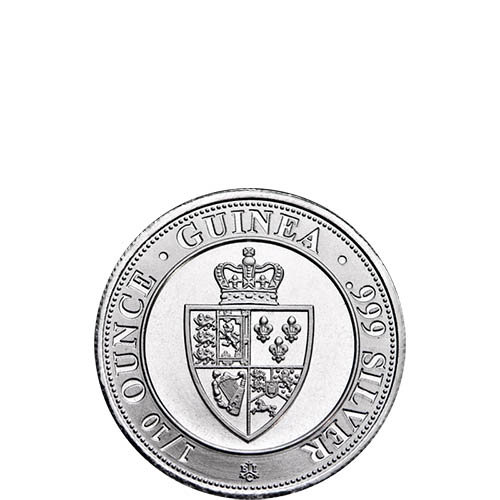 Any quantity available for $3.35 per coin over spot!

One of the more popular design concepts on modern silver bullion coins is the replication of historic circulation coin images. The United States Mint does this on both commemorative issues and its major bullion coins like the American Eagle Series. For the island of St. Helena, one of Britain’s most popular historic designs features on a silver collection introduced in 2018. Right now, 2021 1 oz Silver St. Helena Spade Guinea Shield Coins are available to purchase online at Silver.com.

Each of the 2021 1 oz Silver St. Helena Spade Guinea Shield Coins comes to you in Brilliant Uncirculated condition. The coins in the 1/10 oz silver range in this series are available individually in flips, by multiples of 50 with a plastic tube, and by multiples of 5,000 coins in boxes.

The Silver St. Helena Spade Guinea Shields have a design that comes originally from the Royal Mint as issued in 1787. The Guinea gold coin was issued between 1663 and 1814 in Great Britain. It is notable in English history as the first machine-struck gold coin. The design featured on these coins was the second iteration of the guinea reverse and was introduced in 1787 with active coining continuing through 1799.

The obverse side of 2021 Silver St. Helena Spade Guinea Shields depicts Queen Elizabeth II in the third-generation portrait of Her Majesty for British coins. Designed in 1985, it was used on British denominations through 1997 and depicts the Queen wearing the George IV State Diadem Crown.

On the reverse face of the 2021 1 oz Silver Spade Guinea Shield Coins is the so-called Spade Guinea design from George III’s reign. The 1787 redesign of the Royal Arms of England on the guinea gave rise to the use of the term spade in the name because the shape of the shield resembled a spade shovel. The crowned shield has the Three Lions of England and Lion of Scotland in the first quadrant, the French fleur de lis in the second, the Harp of Ireland in the third, and the coat of arms for the House of Hanover in the fourth quadrant. This version of the Royal Arms shield was in use throughout the reign of the monarchs from the House of Hanover.

If you have any questions, Silver.com is happy to help. Please call us on the phone at 888-989-7223, chat with us live online, or email us directly.