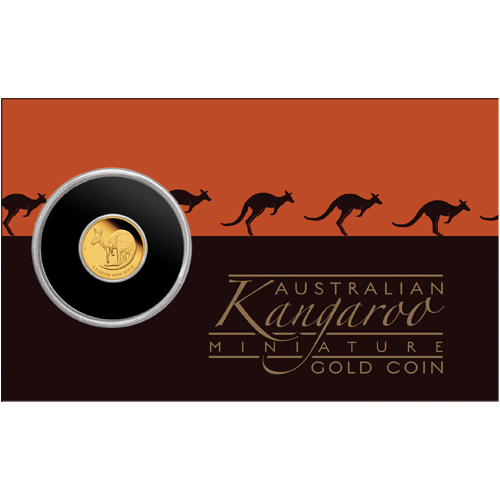 One of the most coveted gold coins for sale in the world is the Gold Australian Kangaroo. The oldest gold bullion series from the Perth Mint and the first major series from the Western Australia-based mint to focus on native wildlife, the Gold Kangaroos have been available in their current form since 1989. In 2010, the diminutive Mini Roo joined the series with its 1/2 Gram weight. Today, 2021 1/2 Gram Gold Australian Mini Roos are available to you online at Silver.com.

When the Perth Mint first released the coins now known as the Gold Kangaroo Series, the year was 1986 and the designs on the coins looked much different than today. The series was then known as the Gold Nugget Series and featured new reverse designs with each date mark that depicted an actual golden nugget discovered in Australia at some point in its history. After three releases, the series was altered to feature the largest living marsupial, a species endemic to Australia, the kangaroo. Since 1989, the series has carried on as the Gold Australian Kangaroo instead.

All of the 2021 1/2 Gram Gold Australian Mini Roos in this listing come in Brilliant Uncirculated condition and offer a distinctive presentation card. The card features a capsule space to protect the coin and comes with a beautiful design that captures the silhouettes of several kangaroos leaping along with the backdrop of a stylized horizon. The card also features the printed phrase “Australian Kangaroo Miniature Gold Coin,” hence the name Mini Roo for this diminutive coin.

On the obverse side of 2021 Gold Australian Mini Roos is an image of Queen Elizabeth II. This is the definitive sixth-generation effigy of Her Majesty to feature on Australian coins and the first since 1966 to include her neckline and shoulders in the portrait. The Queen is captured at the age of 89 in right-profile relief with the magnificent George IV State Diadem Crown upon her head.

The reverse field of the 2021 1/2 Gram Gold Mini Roos comes with the 2021 design of the kangaroo, the world’s largest marsupial. The kangaroo design on the reverse of the Mini Roos captures the namesake animal in the same relief as the other coins in the series, but it does lack the background elements present on the larger coins.

Please don’t hesitate to reach out to Silver.com with any questions. You can call us on the phone at 888-989-7223, chat with us live online, or simply send us an email with your inquiries.