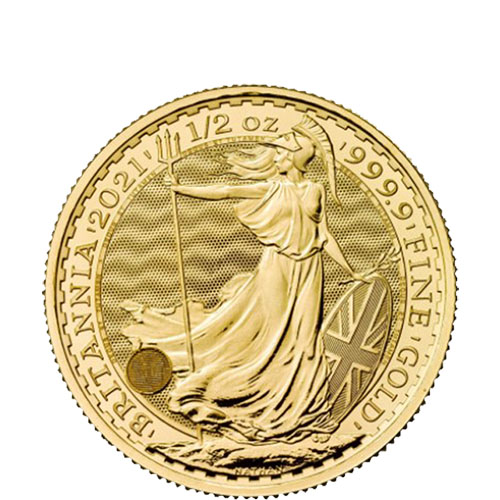 Gold Britannias from the Royal Mint come in a total of six weights each year, offering a good option for any gold buyer. The largest of the mint’s fractional-ounce weights in the series is the 1/2 oz Gold Britannia. For 2021, the Royal Mint has introduced four new security enhancements for its coveted Britannia coins. Right now, 2021 1/2 oz Gold British Britannia Coins are available to purchase online at Silver.com.

Each of the 2021 1/2 oz Gold British Britannias offered here is individually packaged in a protective blisterpack and comes in Brilliant Uncirculated condition. Multiples of the coin arrive in sheets of 20 coins. The 1/2 oz gold coin in the series is one of four that has been available since 1987 when the series debuted. The others are the 1 oz, 1/4 oz, and 1/10 oz gold coins.

For 2021, the Royal Mint of England has enhanced the security of the major coins in the Britannia Series with four new anti-counterfeiting measures. All of these features have been added to the design element on the reverse field of the coin. There are two elements that offer visual change as you adjust your viewing angle. The latent security feature changes to display either a padlock or a trident head as you move the coin. The background field has an animation feature that makes the waves appear to move as the coin moves.

The other two features are more subtle than the two mentioned above. If you look at the Union Jack flag on Britannia’s shield, you will now find tincture lines throughout the stripes. Around the design element there is an inner circle with a micro-text engraving.

The obverse of 2021 1/2 oz Gold British Britannias features an effigy of Queen Elizabeth II. This is the fifth-generation portrait and was created for the Royal Mint in 2015 by Jody Clark. It captures the Queen at the age of 89 with the George IV State Diadem Crown.

If you have any questions about this gold for sale, please contact Silver.com. We are available on the phone at 888-989-7223, online using our live chat, and via our email address.