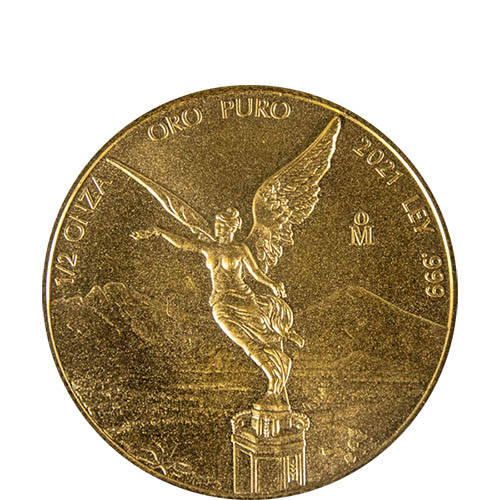 Gold Libertads from the Mexican Mint are some of the most beautiful and unique bullion coins in the world. The series started in 1981, but suffered several different starts and stops before becoming an annual-issue coin in 2002. Every year since that time, the mint has issued the Gold Libertad in five weights, including the 1/2 oz gold coin as the largest fractional-ounce coin. Now, 2021 1/2 oz Gold Mexican Libertads are available to you for purchase online at Silver.com.

The Mexican Mint issued the Gold Libertad for the first time in 1981, one year ahead of its silver counterpart. There were three coin weights available that year that included 1 oz, 1/2 oz, and 1/4 oz gold. It would be another decade before the coins were issued again. In 1991, when the Mexican Mint struck the coins again, those same weights were available with two new options added to the series in the form of 1/10 oz and 1/20 oz gold.

The obverse side of 2021 1/2 oz Gold Mexican Libertads features a depiction of the Mexican coat of arms. The national seal consists of a prickly pear cactus upon which a Mexican golden eagle is battling to devour a rattlesnake. The eagle is shown using its talons and beak to control the serpent. The nation of issue is inscribed above the seal, while a wreath of oak and laurel is below.

On the reverse field of the 2021 Gold Mexican Libertad is Winged Victory. A symbol of Mexico’s victory over Spain in its revolutionary war, Winged Victory is based on the ancient goddess of Nike in Greek mythology, a figure worshipped by victorious generals. Victory is depicted with a crown wreath in one hand and broken chains in the other.

These 2021 1/2 oz Gold Mexican Libertads are available to ship to you with individual protective plastic flips for each coin. All of the coins in this listing are in Brilliant Uncirculated condition from the Mexican Mint.

Silver.com customer service is available to help answer your questions at 888-989-7223. We are also available to you online through our live chat and email address features.