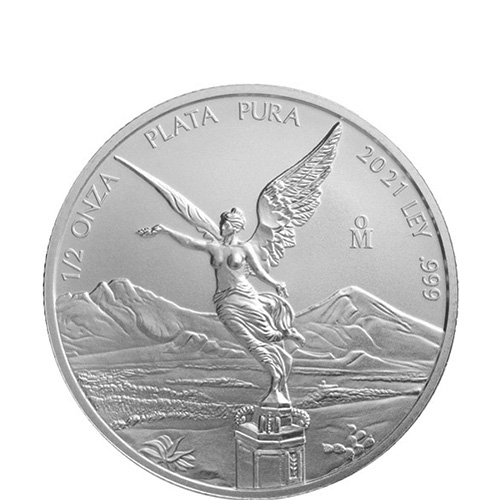 The Silver Libertad is the official bullion coin program of Mexico. Introduced by the Mexican Mint in 1982, the Silver Libertad was issued one year after the debut of the Gold Mexican Libertad in 1981. Both coins, when first released, revived the symbols from the 1921 gold Centenario as the face of the new national bullion program. As of the late-1990s and early 2000s, the coins have modern images of those same designs. Now, 2021 1/2 oz Silver Mexican Libertads are available to you for purchase online at Silver.com.

When the Silver Libertad debuted in 1982, it featured the historic image of Winged Victory from the 1921 release of the gold Centenario. This image captured Winged Victory’s figure in front-facing relief with a wreath crown in her right hand and broken chains in her left. Her figure was dominant in the design field and the background elements were much less prominent. The obverse featured the modern coat of arms for Mexico.

In 1996, the Silver Libertad coins all gained a new, modernized image of Winged Victory that set her figure in a three-quarter side profile with greater prominence given to the volcanic peaks in the background. In 2000, the 1 oz, 2 oz, and 5 oz Silver Libertads were given a ring of 10 historic versions of the national seal on the obverse to surround the modern image.

The obverse side of the 2021 1/2 oz Silver Mexican Libertad comes with a depiction of the modern coat of arms. This national seal captures a Mexican golden eagle on the perch of a prickly pear cactus as it fights against a rattlesnake using its talons and beak. The name of the nation is inscribed in Spanish above the seal, with a wreath below.

On the reverse face of 2021 Silver Mexican Libertads is the modern vision of Winged Victory. Her figure is shown here as it appears on the Mexican Independence Victory Column in Mexico City, with the volcanic peaks of Popocatepetl and Iztaccihuatl in the background field.

These 2021 1/2 oz Silver Mexican Libertads are available to you for purchase in protective plastic flips. All coins are offered through this listing in Brilliant Uncirculated condition from the Mexican Mint.

Silver.com customer service is available to assist you with questions at 888-989-7223. Alternatively, you can reach out to us live online using our webchat or simply send us an email with your inquiries.