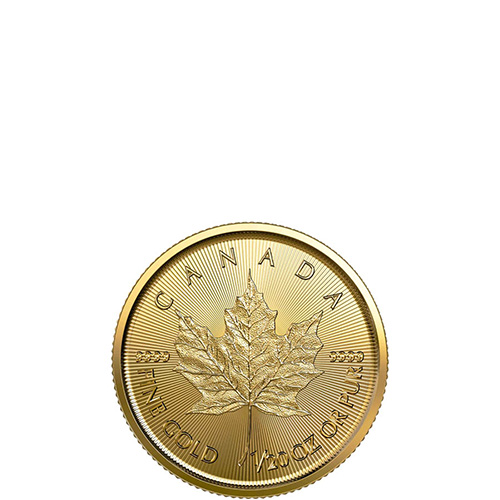 Gold Canadian Maple Leafs are available annually from the Royal Canadian Mint with six weights available. The program launched in 1979 with only a 1 oz gold coin and most recently expanded in 2014 with a 1 Gram gold coin. In between that time, four fractional-ounce coins were introduced into the program. The last of those to debut was the 1/20 oz gold coin.

The Royal Canadian Mint introduced the Gold Canadian Maple Leafs in 1979 in response to growing demand among investors for gold. In the 1970s, Western nations established an economic boycott on the leading gold bullion coins, the Gold South African Krugerrand. No longer available to those hoping to privately hold gold bullion, investors were looking for new options.

On the reverse face of 2021 Gold Canadian Maple Leafs is the national symbol, a sugar maple leaf. The maple leaf design was created in 1979 by Walter Ott and captures the natural splendor of the leaf. Its striations and lines are depicted in the maple leaf image. Ott’s design has been replicated beyond the Gold Maple Leaf Series to be used on the silver, platinum, and palladium versions of the maple leaf.

Silver.com customer service is available to you on the phone at 888-989-7223. We are also available on the web using our live chat and email address features.