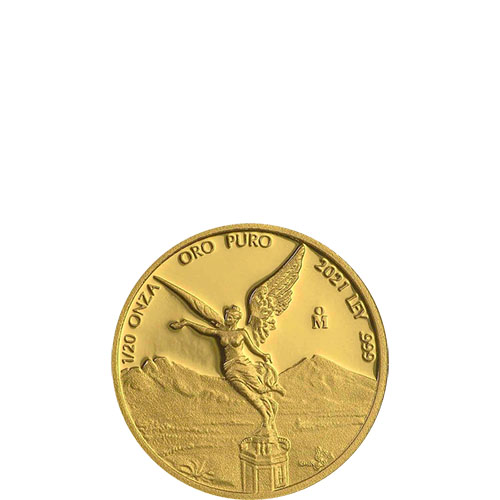 The Gold Libertads at the Mexican Mint were introduced in 1981, though it was the 20th century before most of the BU and Proof coins were available on an annual basis. In the Proof Gold Libertad Series, the coins were first struck in 1989, but annual production did not commence until 2004 in a single weight and 2005 in all five available weights. Today, 2021 1/20 oz Proof Gold Mexican Libertads are available to you online at Silver.com.

The reverse face of the 2021 1/20 oz Proof Gold Libertads comes with an image of the modern coat of arms of Mexico. This design shows a golden eagle in left-profile relief with its wings raised as it battles a serpent within the clutches of its talons. This all takes place as the group is perched on a prickly pear cactus.

Please don’t hesitate to reach out to Silver.com if you have any questions when buying gold. You can call us at 888-989-7223, chat with us live online, or email us directly.