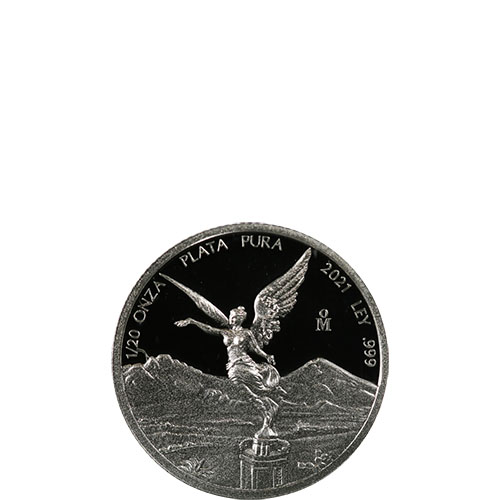 The Mexican Mint issues the Silver Libertads in two major versions each year. Offered across all eight weights in the collection, you will find both Brilliant Uncirculated and Proof options. The series also offers antique and reverse proof coins, but those are limited to two or three weights and not widely available in the collection. Right now, 2021 1/20 oz Proof Silver Mexican Libertads are available to purchase online at Silver.com.

Each of the 2021 1/20 oz Proof Silver Mexican Libertads available to you in this product listing comes with a protective plastic capsule. The coins in the proof range have frosted design elements with mirrored background fields, creating visual contrast between the two visual elements of the coin.

The 1/20 oz Proof Silver Libertad is often the most popular coin among the fractional-ounce weights as the price of silver rises. For example, during the Great Recession, the 1/20 oz Proof Silver Libertad outsold the 1/4 oz and 1/2 oz option because it was a more affordable option during a period that saw silver climb to its record-high price per ounce.

The obverse of 2021 1/20 oz Proof Silver Mexican Libertads depicts the national coat of arms of Mexico. In this design, there is a prickly pear cactus that includes a Mexican golden eagle perched on its arms as it attempts to devour a rattlesnake. The design is based on a symbol from the Codex Mendoza, a codex written by the Aztecs in 1541 to capture the history of the fallen empire and its emperors.

If you have any questions about these fractional-ounce silver coins, please feel free to ask. You can call us on the phone at 888-989-7223, chat with us live online, or email us directly.