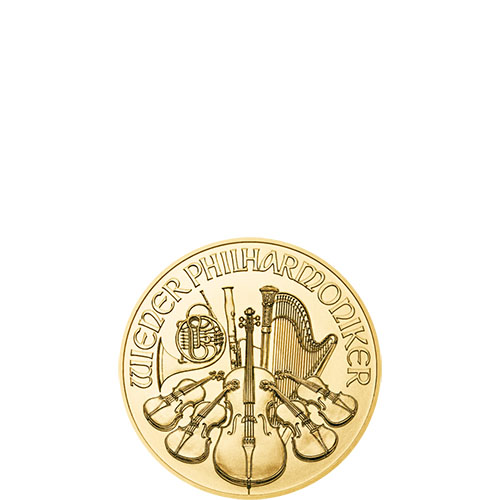 The 1/25 oz Gold Philharmonic is the most recent addition to the Gold Philharmonic range having been introduced by the Austrian Mint in 2014. The 2014 date mark was the 25th anniversary for the series, and as such, the Austrian Mint celebrated with the unique release of a commemorative 1/25 Troy ounce version of the coin. However, this weight proved so popular that it was added to the collection on a permanent basis alongside the 1/2 oz, 1/4 oz, and 1/10 oz fractional coins.

The obverse of the 2021 1/25 oz Gold Austrian Philharmonic Coins includes a depiction of the Great Pipe Organ at the Musikverein. Known as the Golden Hall, the Musikverein was completed in 1870 and built on land gifted to the project by Emperor Franz Joseph I of the Austro-Hungarian Empire.

On the reverse field of 2021 Gold Austrian Philharmonic Coins, you will find a collection of musical instruments. The instruments are arranged with a cello in the central foreground, two violins on either side, and a bassoon, a harp, and a Vienna horn in the background.

These 2021 1/25 oz Gold Austrian Philharmonics are available to you in Brilliant Uncirculated condition. The coins will ship either inside of individual plastic flips or in acrylic tubes of 20 gold coins.

Silver.com customer service is available to assist you with any questions at 888-989-7223. You can also chat with us live online or email us directly.