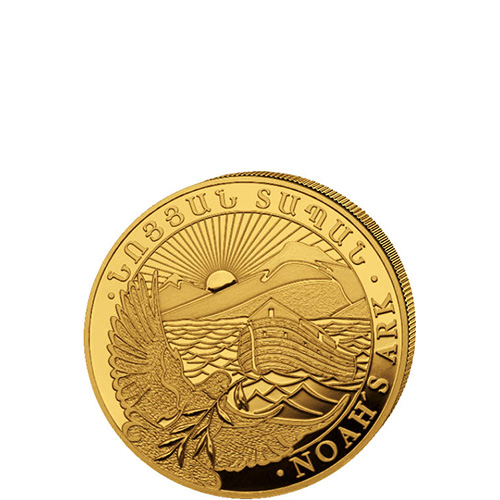 Already a popular series with investors, the Armenian Noah’s Ark Series expanded in 2020 to include gold coins for the first time. The gold for sale in this series debuted with 1 oz, 1/2 oz, 1/4 oz, and 1 Gram gold coins, a unique range of gold weights when compared to other collections. Now, 2021 1/4 oz Gold Armenian Noah’s Ark Coins are available to you for purchase online at Silver.com.

The Gold Armenian Noah’s Ark Series features the same obverse and reverse designs as the Silver Noah’s Ark Series. The designs were created for this series in 2011 by Eduard Kurghinyan and have featured, unchanged, on the fields of the coin each year. These images link the biblical tale of Noah’s Ark to Armenia’s rich past and connections to Christianity.

Ancient Armenian kingdoms controlled the region starting in 860 BCE. Through the final several centuries BCE, the Kingdom of Armenia reached its height. In the 3rd century CE, it became the first state to adopt Christianity as an official religion. Moreover, the biblical tale from the Book of Genesis tells of Noah’s Ark aiding in the survival of Noah’s family and all the world’s animal species during a great flood. The ark came to a rest on Mount Ararat, a mountain once located within the borders of Armenia.

The obverse side of 2021 1/4 oz Gold Armenian Noah’s Ark Coins comes with an image of the coat of arms of the Republic of Armenia. The coat of arms features the heraldic eagle and lion of Armenia supporting the national shield, a quartered shield with eagles and lions within the various quadrants of the shield. At the center of the shield is a small seal with a depiction of Noah’s Ark resting on the tip of Mount Ararat.

On the reverse field of the 2021 Gold Armenian Noah’s Ark Coin is a vision of Noah’s ark. The ark was built to the specifications given to Noah by God and meant to house Noah’s family along with two of every kind of animal in the world. The design shows the ark as a dove approaches with an olive branch in its talons, a symbol that dry land is once again available on Earth.

These 2021 1/4 oz Gold Noah’s Ark Coins are available inside sealed security capsules. The capsules include a Certificate of Authenticity with the individual serial number included on the card. The coins are all in Brilliant Uncirculated condition.

Silver.com customer service is available to assist you at 888-989-7223. Additionally, you can contact us online through our live chat and email address features.