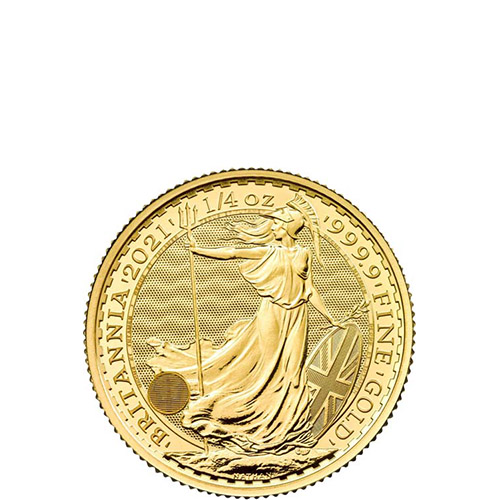 Produced by the Royal Mint since 1987, the gold coins for sale in the British Britannia Series are some of the most coveted by precious metals enthusiasts. Already a trusted series with government-backed .9999 fine gold content, the 2021 release of Gold Britannias is now more secure and trustworthy than ever before thanks to the addition of four impressive new security features on the reverse field. Today, 2021 1/4 oz Gold British Britannias are available to you online at Silver.com.

The Royal Mint has made the Gold Britannia more secure than ever before with the debut of four new security features on the reverse of the coins. Two of the elements are instantly obvious and change with the angle of viewing, while the other two are more subtle, but no less important. The background field is now covered by wavy lines that create a sense of motion as you change the viewing angle. Additionally, the security feature near the base of Britannia’s trident also changes as you adjust the viewing angle to alternate between a trident head and a closed lock. On the Union Jack flag, you will notice tincture lines. In the immediate ring around Britannia’s image, you will find an inscription in Latin that translates as “an ornament and safeguard.”

All of these 2021 1/4 oz Gold British Britannia Coins are available with individual plastic flips. Each coin available to purchase is in Brilliant Uncirculated condition. Introduced when the series launched in 1987, the 1/4 oz was once the second-smallest coin in the series. The introduction of a 1/20 oz gold coin in 2013 bumped it up the list a spot in terms of size.

Queen Elizabeth II features on the obverse side of 2021 Gold British Britannias. In this design, the Queen is shown in right-profile relief in the fifth-generation effigy used during her reign. Jody Clark created this image for the Royal Mint in July 2015 and it has been in use consistently since that time. It depicts the Queen wearing the George IV State Diadem, a piece from the official crown jewels.

Britannia is depicted in a powerful pose on the reverse of 2021 1/4 oz Gold Britannias. Created by Philip Nathan, this modern and impressive vision of Britannia captures the female personification of Britain and its people in left-profile relief. She stands guard on the coastline as the winds whip in off the English Channel, a trident in her right hand and her left hand resting on a shield.

Please contact Silver.com with any questions. You can call us at 888-989-7223, chat with us live online, or simply send us an email.