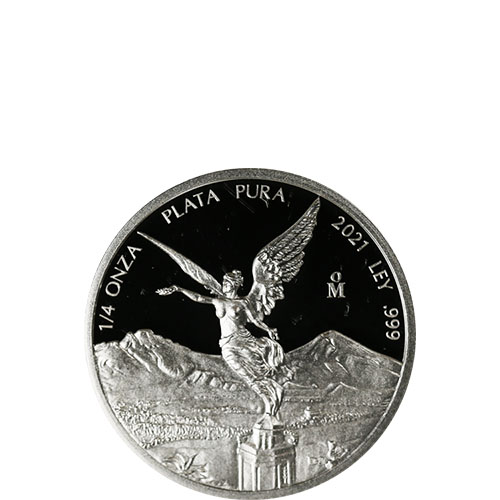 The Proof Silver Libertad coins from the Mexican Mint come in the same range of eight weights offered in the Brilliant Uncirculated series of coins. Each one of the proof coins in this series has a very limited mintage figure, with only three of the four fractional-ounce coins ever surpassing 10,000 coins in a given year. The 1/4 oz coin is the one weight that has never reached that mark. Right now, 2021 1/4 oz Proof Silver Mexican Libertads are available to purchase online at Silver.com.

Each of the 2021 1/4 oz Proof Silver Mexican Libertads available in this product listing comes with a protective plastic capsule and boasts traditional proof visuals. A proof coin comes with contrasting visuals for the design elements and background fields. These visuals consist of frosted designs and clear, mirrored fields.

The obverse side of the 2021 1/4 oz Proof Silver Mexican Libertads bears the Mexican coat of arms. The national coat of arms comes with the image of a Mexican golden eagle on its perch on a prickly pear cactus battling to devour a rattlesnake. According to Aztec founding mythology, an Aztec god told the people to found the city of Tenochtitlan on the spot where they encountered an eagle devouring a snake.

On the reverse field of 2021 Proof Silver Mexican Libertads is a vision of Winged Victory. Based on ancient depictions of the goddess of victory from Greek and Roman mythology, Nike and Victoria respectively, Winged Victory is unique to Mexico in her use of both a wreath crown in her right hand and a set of broken chains in her left hand.

The Mexican Mint was founded in 1535 by Spanish conquistadors under orders from the Spanish Crown. The mint is the oldest in the Western Hemisphere and once produced coins for Spanish territories throughout Central America, South America, and Spanish colonies in the Pacific Ocean.

If you have any questions when you buy silver online, please feel free to reach out to Silver.com. Our team is available to you on the phone at 888-989-7223, online through our live chat, and using our email address.