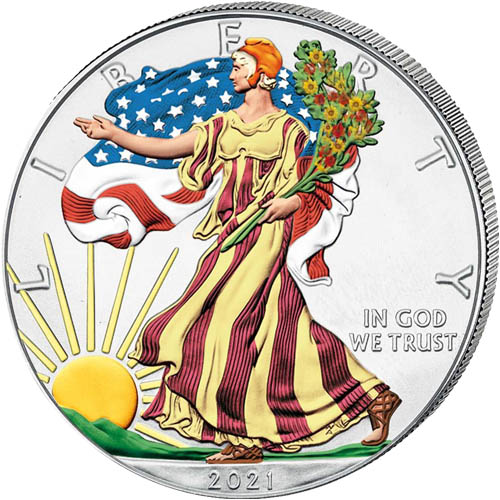 The Silver Eagles from the United States Mint are annually available in three major versions: Brilliant Uncirculated, Proof, and Burnished. The BU coins are the most readily available, with production figures in the millions each year. Within the BU release, you will also find enhanced versions that include the colorized and gilded options. Today, 2021 1 oz Colorized Silver American Eagles are available to you online at Silver.com.

Colorized Silver American Eagles are coins that originated at the United States Mint. Each one is a Brilliant Uncirculated strike from the mint that has been enhanced with the colorized field by a third-party authorized dealer. The dealer applies these thin layers of colorized lacquer to reimagine the visuals found on prominent coins such as the Silver American Eagle.

All 2021 1 oz Colorized Silver American Eagles in this listing come with an individual plastic capsule. As mentioned, these coins are in BU condition and feature unique obverse visuals. The thin layers of lacquer have been applied to the figure of Liberty on the obverse, as well as the American flag and the design elements on the horizon, including the sun and mountain.

On the obverse side of 2021 Colorized Silver American Eagles is Walking Liberty. Created by Adolph A. Weinman, this image was submitted to the United States Mint in 1916 for consideration to replace the three major denominations of the Barber Coinage. The design was chosen for the US Half Dollar and featured on that coin until 1947. This side of the coin has the aforementioned colorization covering the figure of Liberty as she strides confidently toward the sun on the horizon.

The reverse field of the 2021 1 oz Colorized Silver Eagles comes with a design known as the heraldic eagle of the United States. The heraldic eagle has featured on the coins since the 1986 debut of the series and the design element, one that has been in use on American coins since 1794, was modernized for this release by John Mercanti. This is the final date mark that will feature the heraldic eagle design, with coins issued from mid-2021 onward bearing the new reverse image of the bald eagle.

Please feel free to reach out to Silver.com with your inquiries. Our team is available on the phone at 888-989-7223, on the web using our live chat, and via our email address.