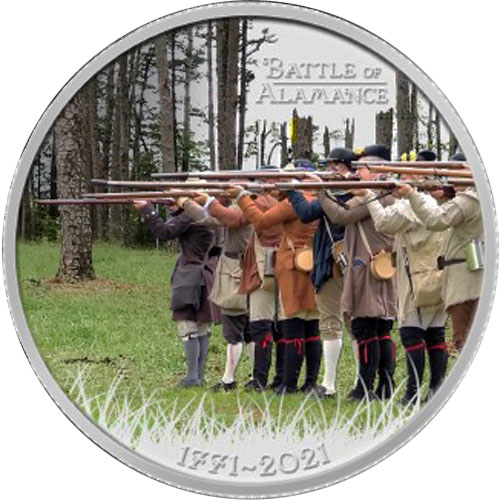 The American Revolution began in 1775 with the Battles of Lexington and Concord, and ended in 1783 with the signing of the Treaty of Paris. While the focus of history has been on the battles that took place during this period of the war, there were other conflicts, skirmishes, and altercations in the decade leading up to the start of the war that served as a sign of things to come. In the first release of a 1 oz silver coin for sale in the American Revolution Series, the Native American Mint depicts the scenes from the Battle of Alamance. Right now, 2021 1 oz Colorized Silver American Revolution Battle of Alamance Coins are available to purchase online at Silver.com.

Each 2021 1 oz Colorized Silver American Revolution Battle of Alamance Coin listed here is available with its own plastic capsule. The coins are accompanied at shipping by a Certificate of Authenticity from the Native American Mint. The NA Mint’s COA for this series includes the American flag of the American Revolution with its familiar 13 red-and-white stripes and blue field with a circle of 13 white stars. These coins are proof specimens with frosted designs and mirrored fields, as well as a thin layer of colorized lacquer on the obverse design of the militia soldiers.

The Battle of Alamance was the final battle in a long-running conflict in what was then known as the British American colony of North Carolina. That conflict, the War of the Regulation, was fought between American colonists in the western counties of the colony and the forces loyal to the Royal Governor. The Americans, known as Regulators, were pushing back against the abuses of the colonial governor and a system they viewed as corrupt.

The obverse of 2021 Colorized Silver Battle of Alamance Coins comes with a colorized depiction of militia forces taking aim in the midst of battles. The engagement was fought near the Great Alamance Creek in western North Carolina.

On the reverse of the 2021 Colorized Silver American Revolution Coins is a common design element depicting the Liberty Tree. An actual elm tree that once stood near Boston Common, the Liberty Tree earned its nickname for the rallies that American patriots from in and around Boston would hold near the tree. It was here that arguments for independence and greater freedom were made by the colonists.