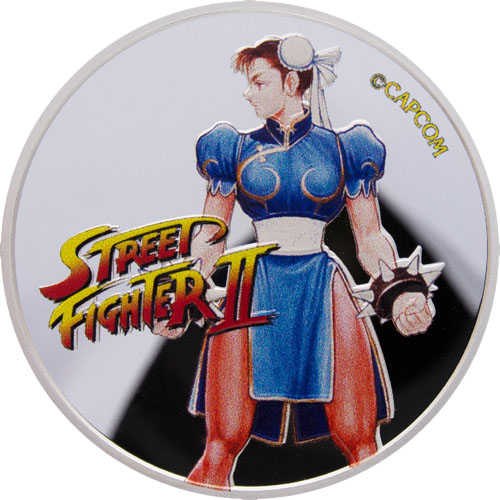 The first playable female character to appear in any fighting video game was Chun-Li, a specialist in Chinese Kempo who made her debut in 1991 with the release of Street Fighter II. While she did not appear in the immediate Street Fighter II release, she did eventually show up in the expansion Street Fighter II: The World Warrior release. Today, 2021 1 oz Colorized Silver Fiji Street Fighter II Chun Li Coins are available to you online at Silver.com.

The Silver Street Fighter II Series of silver coins for sale celebrates some of the most important characters from the overall franchise, and from the Street Fighter II series of game releases. Only one character in this four-coin release, Ryu, featured in the original game and is widely considered the primary character. The other three issues featured players who debuted in Street Fighter II. M Bison and Vega were originally unplayable bosses that human players had to defeat in single-player mode. Chun-Li is the fourth character and debuted as the first-ever playable female character in a fighting game.

All of the 2021 1 oz Colorized Silver Fiji Street Fighter II Chun-Li Coins come to you in Brilliant Uncirculated condition and arrive with a protective plastic capsule. The coins come with a colorized design on the reverse field.

On the obverse of 2021 1 oz Silver Fiji Street Fighter II Chun-Li Coins is an image of the Fijian coat of arms. The national seal depicts symbols of Fijian culture and commerce, with one in each of the four quadrants. The shield has a lion in passant guardant at the top, with a Polynesian canoe above the shield. The shield is supported by native Fijians on either side.

The reverse field of the 2021 1 oz Colorized Street Fighter II Chun-Li Coin comes with a depiction of the female fighter. Skilled in Chinese Kempo, Chun-Li is an Interpol agent who is on a vendetta to avenge the death of her father at the hands of M Bison, one of the new bosses introduced in Street Fighter II.