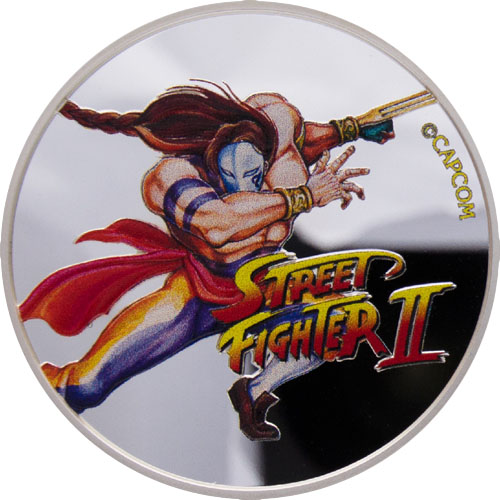 In 1991, Street Fighter II debuted in the fighting game franchise known as Street Fighter. Produced by Capcom, the release of the game brought several advancements in the series. Some of these included playability features, while others included the addition of new playable characters for fans of the franchise. Some of these new characters are celebrated in a silver bullion coin series. Right now, 2021 1 oz Colorized Silver Fiji Street Fighter II Vega Coins are available to purchase online at Silver.com.

Street Fighter II offered a number of changes to fans who jumped on board with the franchise in 1987 with its debut. These new features included command-based moves that were special to each character, a combo system for devastating attacks on opponents, and a six-button configuration. Additionally, new characters were added to the game, with each new figure offering a unique fighting style.

The obverse of 2021 Colorized Silver Fiji Street Fighter II Vega Coins comes with the national coat of arms of Fiji. The national seal features a shield quartered by the St. Andrew’s Cross, with a lion in passant guardant pose at the top of the shield. The shield has a Polynesian canoe above its field with native Fijian figures supporting the shield on either side. The banner on this field of the coin includes the national motto.

If you have any questions, please don’t hesitate to ask. Silver.com customer service can help you at 888-989-7223, online using our live chat, and via our email address.