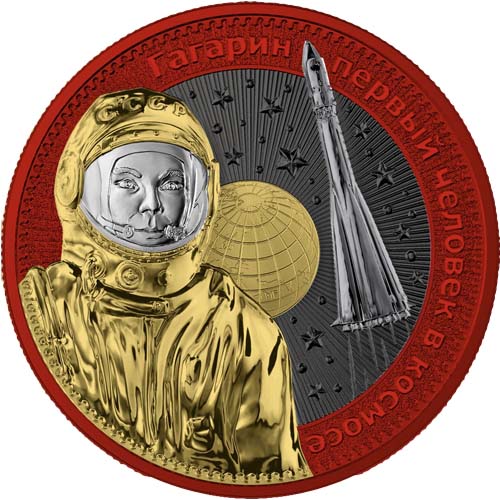 In a new series of silver rounds from the Germania Mint, the early achievements of the Soviet space program are celebrated. The first design in the new Interkosmos Series honors the first human being to orbit the Earth, Soviet Cosmonaut Yuri Gagarin. Right now, 2021 1 oz Colorized Silver Germania Interkosmos Gagarin Orbital Rounds are available to purchase online at Silver.com.

The silver rounds in the colorized release of Interkosmos Series rounds come with a number of impressive visuals. The rounds have red colorization throughout the reverse background and along the design rim on the obverse. The primary design elements of Gagarin and Earth on the obverse, as well as the State Emblem on the reverse, have a gold-plated finish. The background field representing Space on the obverse has a ruthenium plating, with the orbital capsule boasting a palladium plating.

The obverse of 2021 Colorized Silver Germania Interkosmos Gagarin Orbital Rounds comes with a depiction of Yuri Gagarin in the foreground. In 1961, he became the first human to orbit Earth. Gagarin’s successful orbit of Earth was the biggest achievement in the early years of the Space Race.

On the reverse side of 2021 1 oz Germania Interkosmos Gagarin Orbital Rounds is the State Emblem of the Soviet Union. The state seal includes the famous hammer and sickle popular among many communist nations. The Soviet Union’s space program landed many of the first big blows in the Space Race between the Soviets and the United States of America.

If you have any questions when buying silver, please feel free to ask. Silver.com customer service is available to assist you at 888-989-7223, online using our live chat, and via our email address.