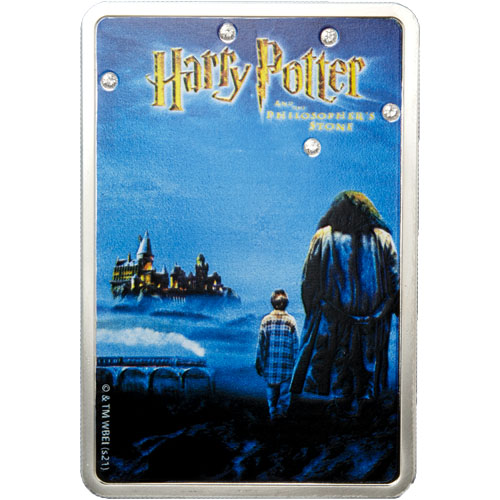 Fans of all-things Harry Potter have a seemingly endless supply of silver coins for sale to purchase as valuable keepsakes from the franchise. To silver foils and coins to rectangular silver bullion coins, the options are limitless. Among the recent releases is a colorized, rectangular silver proof that honors the 20th anniversary of the first feature film from the franchise. Now, 2021 1 oz Colorized Silver Samoa Harry Potter and the Philosopher’s Stone Anniversary Coins are available to you for purchase online from Silver.com.

J.K. Rowling’s wizarding world follows the adventures of Harry Potter, a young wizard, and his closest friends as they go to school at Hogwarts School for Witchcraft and Wizardry. The novel series written by Rowling covered seven books in total and was eventually adapted for the big screen.

In total, eight films were produced in the Harry Potter franchise, with Rowling’s final book split into two different films. While the novels were immensely popular, most fans of the franchise associate the imagery from the films with the characters they read about in the books. In honor of the 20th anniversary of the first film in 2021, colorized silver coins were made with images from the film.

The obverse of 2021 1 oz Colorized Silver Samoa Harry Potter and the Philosopher’s Stone Anniversary Coins comes with a depiction of Queen Elizabeth II. This effigy of the Queen is the fourth-generation design from the Royal Mint and was created in 1998 by Ian Rank-Broadley.

On the reverse side of 2021 Colorized Silver Harry Potter and the Philosopher’s Stone Anniversary Coins is a colorized depiction of images from the first film. Here, we see Harry in his pajamas in the foreground with Hagrid, reminiscent of their first encounter in the film. In the distance, the Hogwarts Express steams along the misty hills toward Hogwarts castle.

These 2021 1 oz Colorized Silver Samoa Harry Potter and the Philosopher’s Stone Anniversary coins have colorized visuals on the reverse side and are packaged directly in plastic capsules for delivery. The encapsulated coin is offered in a presentation booklet and comes with a Certificate of Authenticity.

Silver.com customer service is available at 888-989-7223. Additionally, you can chat with us live online or simply send us an email.