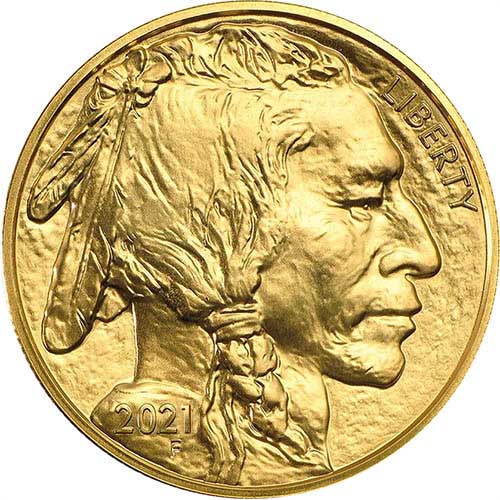 Gold American Buffalos are one of several annual-issue bullion coins from the United States Mint. The American Eagle Series offers annual bullion coins in gold, silver, platinum, and palladium, with the Gold Buffalo representing the other main option for investors and collectors.

The Presidential $1 Coin Act of 2005 was passed during the administration of President George W. Bush. The legislation mandated the production of a presidential dollar coin series starting in 2007 and a redesign of the US penny in 2009. In addition, the act mandated the release of a new one ounce gold coin with 24-karat gold content.

Interestingly enough, the legislation initially included a mandate that the coin’s face value be set at $50 (USD) and its maximum mintage be set at 300,000 for the gold bullion version. The 2006 debut of the Gold American Buffalo actually surpassed the maximum mintage established with the 2005 legislation as the series sold a total of 337,012 coins in 2006. Mintages fell in half the following year and slowly climbed from 2008 to 2011 when it peaked at 250,000 coins. That is the highest the series has seen for mintages since that time.

The obverse side of 2021 1 oz Gold American Buffalos comes with a depiction of an indigenous American Indian figure. The male figure is shown in right-profile relief with feathers woven into his braided hair at the back of his head.

On the reverse face of the 2021 Gold American Buffalo is an image of an American bison. Known in North America as a buffalo, the bison is the largest land mammal in North America and the image shown here is a left-profile bust of the buffalo on a small mound of dirt. The design featured here is inspired by Black Diamond, a resident bison of the Central Park Zoo in New York City at the turn of the 20th century.

These 2021 1 oz Gold American Buffalos are available to you for purchase in Brilliant Uncirculated condition. Coins in the Gold Buffalo Series ship individually with protective flips and in multiples of 20 with mint tubes.