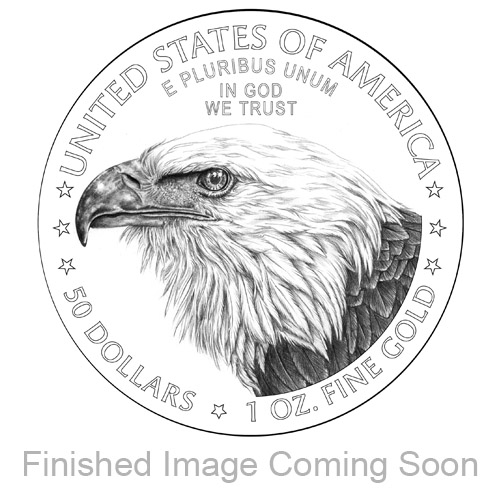 To celebrate the 35th anniversary of the American Eagle Series at the United States Mint, the Artistic Infusion Program coordinated by the mint generated 30-plus designs for the mint and the CCAC to consider in replacing the Miley Busiek bald eagle design that has graced the reverse of the coins since 1986. A new design was finally chosen in late 2020, but not in time for the US Mint to develop dies for striking the new coins when 2021-dated coins when into production. As such, the US Mint launched its 2021 Gold Eagles with the original design combinations, and will launch the new reverse design on 2021 Gold Eagles by mid-2021. While you can look forward the Silver.com’s presale of the new 2021 Gold Eagle design by early Summer 2021, you can learn more about it right now.

The Power of the Eagle

In keeping with the theme of the redesign, the new reverse of the Gold American Eagle offers a realistic vision of the American bald eagle. Created by Jennie Norris, the new visual shows a left-profile image of the bald eagle. Showing just the head of the bird from roughly its shoulders upward, the face of the eagle includes one peering eye gazing out toward the distant horizon. The powerful, hooked beak it uses to consume its prey is prominent in the design, and the details of its feathers are easily spotted. Though the design is not colorized, you can tell the difference between the plumage of its head and that of its body. Inscriptions have been rearranged to accommodate the new design. In descending order above the bird’s head, you will find “United States of America,” “E Pluribus Unum,” and “In God We Trust.” Along the bottom of the design field, you will find “50 Dollars – 1 oz. Fine Gold.” Three stars feature on either side of the design rim to separate the inscriptions.

Jennie Norris is the artist behind the new reverse visual on 2021 Gold American Eagles. Ms. Norris has a rich career as a professional graphic designer, illustrator, and fine artist. She has worked with some of the most recognizable brands in the world, including Crayola, Sea World, Hasbro, and Hershey. Stationary designs she’s created have appeared at retailers such as Michael’s, JoAnn Stores, Target, and Costco. Today, she works as a graphic designer at the University of Arizona. She also has a deep passion for the outdoors and wildlife conservation, even volunteering her time at raptor rescue and rehabilitation sanctuaries. This gave her perfect insight on bald eagle for the design she created for the Artistic Infusion Program.

Introduced in 1986, the Gold American Eagle has been available in four weights every year since the first BU Gold Eagles were released. On the 35th anniversary of the series, take a moment to enjoy some fun facts about the series: