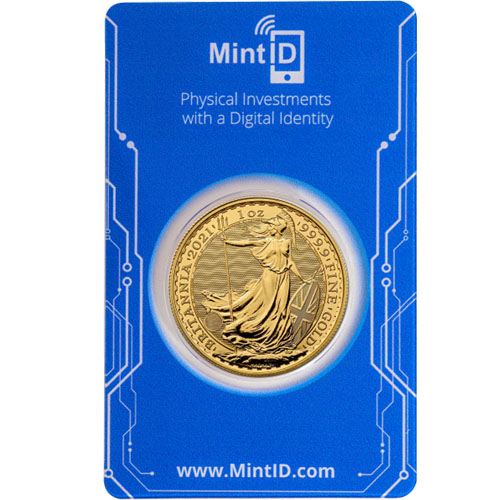 The introduction of MintID packaging has made it possible for already trusted, secure forms of gold bullion to become even more secure when delivered to buyers. MintID packages make use of NFC chips and 128-bit encryption to create not only a secure packaging option for coins, but also an encrypted, authenticated profile for each individual specimen. Right now, 2021 1 oz Gold British Britannia Coins in MintID packaging are available to purchase online at Silver.com.

Each of the 2021 1 oz Gold British Britannia Coins available through this specific listing come with MintID packaging. MintID housing consists of a sealed blisterpack with tamper-evident enclosures and an NFC chip applied to the pack. This chip can be scanned using an NFC-enabled smart device and the MintID app. Each NFC chip is 128-bit AES encrypted, ensuring that the authentication information on the coin is accessible only by the coin owner. Additionally, the NFC chip is rendered useless if there are attempts to tamper with it, providing another layer of security for the coin.

The obverse side of 2021 Gold British Britannias comes with an effigy of Her Majesty, Queen Elizabeth II. The Queen is shown in this 2015 design at the age of 89 while wearing the George IV State Diadem Crown.

On the reverse field of 2021 1 oz Gold Britannias, you will find Philip Nathan’s depiction of a powerful Britannia figure. She stands defiant on the coast with a trident in one hand and the Union Jack shield in the other. This side of the coin has the Royal Mint’s new security features included. Here, you will find tincture lines on the Union Jack shield, micro-text around the immediate design element, and two features that changed based on the movement of the coin. Behind Britannia, waves that mimic the rolling ocean actually seem to move as you adjust the coin. A new security mark also changes as the coin moves to swap between the image of a trident head and a lock.