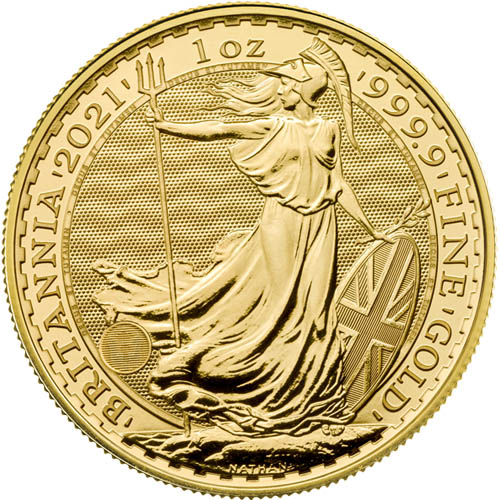 Available as of 1987, the Gold British Britannias are some of the oldest gold bullion coins for investors to acquire when buying gold. The Gold Britannia debuted with five weights available to investors and offered 91.67% gold content in the coins. As of 2013, the series features seven weights and 24-karat gold content.

The debut of the Gold British Britannias in 1987 included 1 oz gold, 1/2 oz, 1/4 oz, and 1/10 oz gold coins. These coins used the historic Crown gold alloy of 91.67% gold with other metals making up the remainder of the metallic composition. From 1987 to 1989, copper made up the remainder of the metal content in the 22-karat gold coins, while silver was the metal of choice to complete the composition from 1990 to 2012.

All of the 2021 1 oz Gold British Britannia Coins in this product listing come with individual packaging or multiples. Individual coins ship in plastic flips, multiples of 10 in mint tubes, and multiples of 100 coins in boxes. The box has 10 tubes of 10 coins each. All specimens are in Brilliant Uncirculated condition.

For the release of 2021 Gold Britannias, the Royal Mint has introduced new security features to the coin’s design. The reverse background field has an all-new animation feature that imitates the waves of the ocean as the angle of viewing changes. Changing the viewpoint also adjusts the image in a new latent security feature, switching between a trident and a padlock. The stripes of the Union Jack now feature tincture lines and there is an inscription in Latin of “An Ornament and a Safeguard” on the design rim.

On the obverse side of 2021 Gold British Britannias is Queen Elizabeth II, the reigning Queen of England and the longest-reigning monarch in English history. This right-profile bust depicts the Queen at the age of 89 as she wears the George IV State Diadem Crown. Commissioned in 1820 during the first year of George IV’s reign, the stunning crown features 1,333 diamonds in its setting that weigh more than 300 karats in total.

The reverse face of the 2021 1 oz Gold British Britannia features a modern image of Britannia. This bust of Britannia shows her figure resting her left hand on a shield with the Union Jack and her head looking toward her right hand that clutches the trident, and ancient weapon the Greeks said gave the god Poseidon control over the seas.

Please don’t hesitate to reach out to Silver.com if you have any questions. You can contact our customer service team on the phone at 888-989-7223, chat with us live online, or simply send us an email.