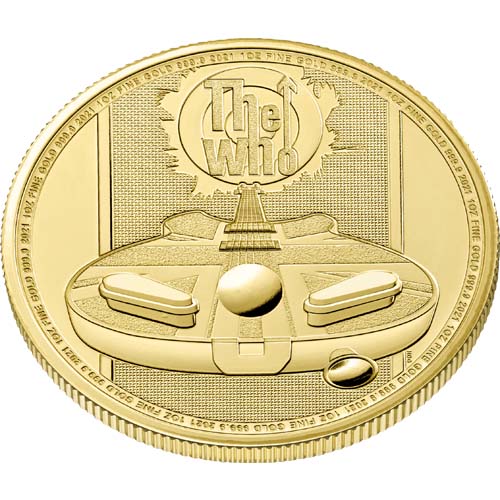 The fourth coin and second release in 2021 for the Gold British Music Legends Series features the iconic rock band The Who. Formed in 1964, some of the original members still perform together in the group nearly 60 years later. Known for their unique style and auto-destructive performances, The Who influenced multiple generations of performers that came after. Right now, 2021 1 oz Gold British Music Legends The Who Coins are available to purchase online at Silver.com.

Each 2021 1 oz Gold British Music Legends The Who Coin is offered here today in Brilliant Uncirculated condition. The coins in the 1 oz gold release are available only with an individual packaging option, with each coin housed in a protective plastic capsule.

The Gold British Music Legends Series launched alongside its silver counterpart, with proof coins also offered in the silver range. The 1 oz BU options in both metals have limited mintage figures, with the silver coin set at 25,000 per design and the gold coin set at a fraction of that mintage with just 2,500 in total.

The obverse of 2021 Gold British Music Legends The Who Coins comes with a depiction of Queen Elizabeth II. This popular right-profile effigy is the fifth of Queen Elizabeth II’s reign and celebrates the longest-reigning monarch in British history with an elegant, regal design that includes the George IV State Diadem Crown.

On the reverse side of the 2021 oz Gold Music Legends The Who Coins is an image of a guitar smashing through an amplifier. The Who were famous for destroying guitars and drums on stage, and as this guitar emblazoned with the Union Jack bursts through the amplifier it reveals the mod roundel of The Who, along with the group’s signature name.

If you have any questions, please feel free to ask. Silver.com customer service is available at 888-989-7223, online through our live chat, and via our email address.