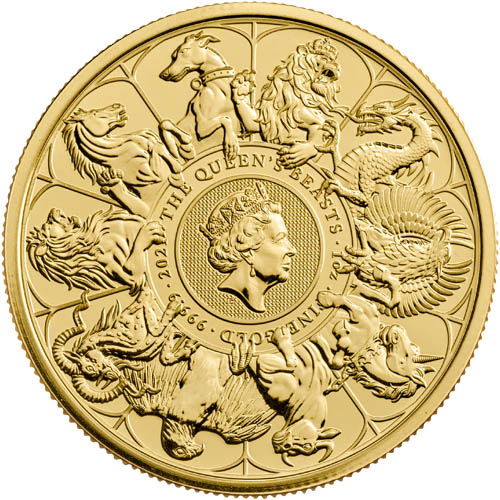 Since 2016, the Queen’s Beast Series of bullion coins from the Royal Mint has dazzled amateur monarchy historians, investors, and collectors alike with its impressive designs. The series is so named because each of the coins for sale bears a unique image of a different heraldic beast. These animals were not chosen at random by the Royal Mint, but rather, inspired directly by a series of 10 statues of heraldic beasts present at the coronation ceremony of Queen Elizabeth II in 1953. Now, 2021 1 oz Gold British Queen’s Beast Collection Coins are available to you for purchase online at Silver.com.

The 2016 introduction of the Queen’s Beast Series launched a 10-coin series chronicling the animals present at the coronation ceremony of Elizabeth II. As she entered Westminster Abbey, she was created by wooden carvings of the 10 beasts that have been passed down through centuries of monarchs to the reigning Queen of England.

The obverse side of 2021 Gold British Queen’s Beast Collection Coins features a right-profile portrait of Elizabeth II. Designed in 2015 by Jody Clark, this portrait is the definitive fifth-generation effigy of Her Majesty to grace British coins. The background field on this side has the Royal Mint’s guilloche design element.

On the reverse face of the 2021 oz Gold Queen’s Beast Collection Coin comes with the Jody Clark effigy of the Queen downsized to fit within the central field of the coin. In a ring around the Queen, you will find all 10 of the heraldic beasts represented in the series. The circle starts with the Lion of England near the 12-o-clock position and winds around in the order the creatures debuted in the series until reaching the Greyhound of Richmond.

These gold coins for sale in the 2021 1 oz Gold British Queen’s Beast Collection are available with either individual flips or plastic tubes of 10 coins. You can also purchase a Master Box of 100 coins holding 10 separate 10-coin tubes. Each one of the coins is available in Brilliant Uncirculated condition.

Silver.com customer service can assist you at 888-989-7223. Alternatively, you can chat with us live online or simply send us an email.