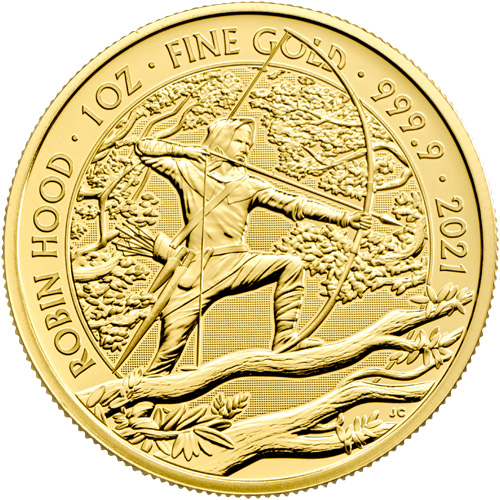 In a new series from the Royal Mint of England, the heroes of British folklore take center stage in a collection of 1 oz gold and 1 oz silver coins. The first figure to feature in the new Myths and Legends Series is Robin Hood, the famed outlaw of Sherwood Forest. Now, the 2021 1 oz Gold British Robin Hood Coin is available to you for purchase online at Silver.com.

In the earliest Robin Hood tales, he is fiercely loyal to the common people of England and bitterly against the crooked Sheriff of Nottingham. However, while modern stories have an additional twist in the tale wherein Robin Hood concerns himself in matters of state by pushing back against Prince John’s usurpation of the throne of King Richard I. These factors do not feature in the earliest recordings of the Robin Hood myth though.

The obverse of 2021 1 oz Gold British Robin Hood Coins features a right-profile portrait of Queen Elizabeth II. Created in 2015 by Jody Clark, the design is the fifth-generation effigy of Her Majesty and shows her with the George IV State Diadem Crown.

On the reverse side of 2021 Gold British Robin Hood Coins is the depiction of the outlaw of Sherwood Forest. In this design, also created by Clark, Robin Hood kneels on the branch of an oak tree within the forest as he draws back an arrow and waits on his enemy to get close enough to fire. This side of the coin has an all-new background feature from the mint. The micro-dot texture helps create visual contrast while also delivering enhanced security to the coin.