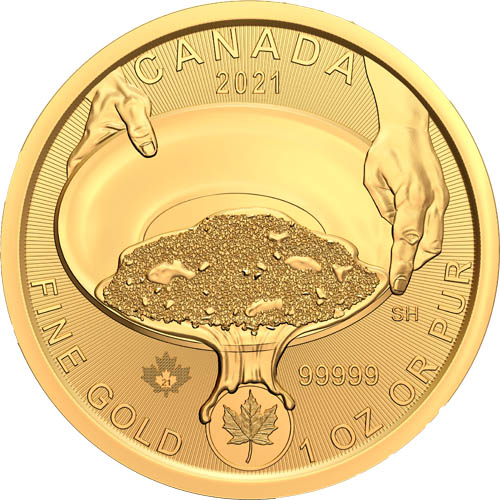 In August 1896, the Klondike Gold Rush kicked off in Canada and drew thousands of prospectors and explorers to the vast expanses of northwestern Canada. Over the next three years, thousands would flock west hoping to strike it rich. The Royal Canadian Mint marks the 125th anniversary of the first gold discovery in the Klondike region of the Yukon with the release of a new series of gold coins for sale known as the Klondike Gold Rush Series. Now, 2021 1 oz Gold Canadian Panning for Gold Coins are available to you for purchase online at Silver.com.

The new Klondike Gold Rush Series from the Royal Canadian Mint marks the 125th anniversary of the first discovery of gold in the Yukon territory. Over the course of the next three years, prospectors, explorers, and families would move west from the eastern provinces of Canada hoping for a reversal of fortune. In 1897, news of the Klondike gold discovery reached American cities such as Seattle and San Francisco on the west coast. This provided another jolt as Americans now headed north in search of riches.

Almost overnight, towns that were minuscule in population before the gold rush or that never even existed before suddenly experienced a swell in population. Dawson City was founded at the confluence of the Klondike and Yukon Rivers early in the gold rush, quickly growing from a population of 500 residents to more than 30,000.

The obverse of 2021 1 oz Gold Canadian Panning for Gold Coins features a portrait of Queen Elizabeth II. Her Majesty is shown here in right-profile relief in a design created in 2003 by Susanna Blunt. This effigy of the Queen is the first on Canadian coins during her reign to lack a crown and only the second of her reign created by a Canadian artist.

On the reverse side of the 2021 Gold Canadian Panning for Gold Coin is an image of a prospector’s gold pan. Full of sediment with the potential for small gold nuggets and leaf to shine through, the water is poured out of the pan onto a maple leaf logo. This side of the coin also features the laser micro-engraved maple leaf privy. This privy includes the date mark of “21” inside that is only visible under magnification.

These 2021 1 oz Gold Canadian Panning for Gold Coins are available in Brilliant Uncirculated condition. Each coin is packaged inside of an assay card with the authentication details for the coin, including the signature of the Chief Assayer of the Royal Canadian Mint.

Silver.com customer service can assist you with questions at 888-989-7223. We are also available online using our live chat and email address features.