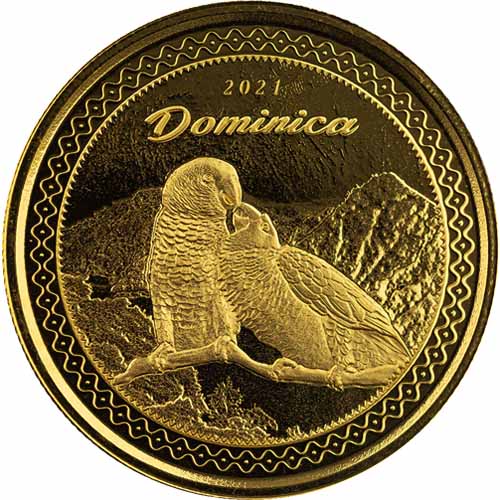 2021 is the fourth year of release of the EC8 coin program from the Scottsdale Mint. Eight different designs have been manufactured and distributed for each year of release from the Scottsdale Mint. These designs represent each of the island territories in the Eastern Caribbean, since all eight territories are considered monetary authorities under the Eastern Caribbean Central Bank. The island of Dominica is represented with the release of the 2021 1 oz EC8 Gold Dominica Coin BU, which is available for purchase now from Silver.com.

The 2021 1 oz EC8 Gold Dominica Coin BU listing from Silver.com is struck in 99.99% fine gold and arrives in Brilliant Uncirculated condition. This coin ships directly to your door in a Serialized CertiLock card for the 4th year of release for the Dominica gold coin. The 2021-coin design has been featured on other Dominica coins, including versions featuring colorized silver, all-silver, and gold.

The EC8 coin series features four years of coins with eight unique designs from the Scottsdale Mint. Every design is a representation of one of the eight island nations in the Eastern Caribbean. These eight territories include Antigua and Barbuda, Grenada, Anguilla, Saint Kitts and Nevis, Montserrat, Saint Lucia, and Saint Vincent and the Grenadines. All eight nations are legal tenders of the Eastern Caribbean Central Bank, and each designated coin features a rich design and lower mintage.

On the obverse of the 2021 1 oz EC8 Gold Dominica Coin BU, Queen Elizabeth II is seen with her original profile portrait from 1998. This portrait was created by Ian Rank-Broadley and has been used on many coins minted worldwide, including those from Australia, New Zealand, and Britain. The 2021 gold coin obverse also shows the purity, weight, and value of the coin, as well as two inscriptions: “QUEEN ELIZABETH II” and “EASTERN CARIBBEAN CENTRAL BANK”.

The reverse of the 2021 1 oz EC8 Gold Dominica Coin BU shows two Imperial Amazon parrots, also known as the Sisserou. The Sisserou is the national bird of the island nation of Dominica and is a highly endangered species. It’s estimated that only 50 mature individuals are left in Dominica. The reverse of the 2021 coin also shows its release year and the country’s inscription.

Our team at Silver.com is here to answer any questions you may have about gold for sale. Contact us today using our online live chat, email address, or give us a call at 888-989-7223.