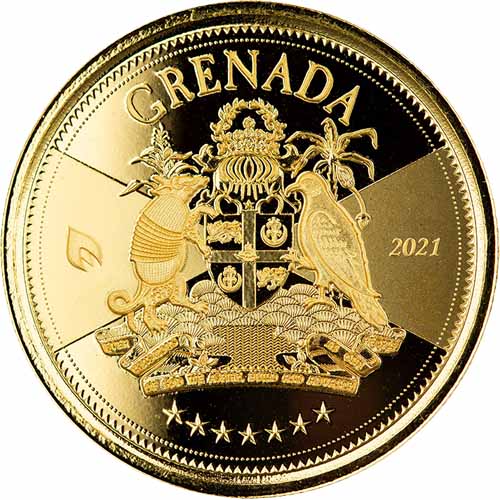 The gold for sale in the EC8 Series at the Scottsdale Mint is one of the most diverse annual programs you will find. Each new date mark in this series brings a total of eight fresh designs, each one representing a different member state using the Eastern Caribbean Central Bank as its monetary authority. Today, 2021 1 oz Gold EC8 Grenada Coins are available to you online at Silver.com.

Grenada is a small island in the West Indies at the very southern end of the Grenadines chain of islands. The nation is one of the founding members of the Organization of Eastern Caribbean States, a group that includes seven founding members from the Caribbean Sea and four additional members that have joined since 1984. Grenada is one of the eight nations from the OECS that uses the Eastern Caribbean Central Bank as its monetary authority.

All of these 2021 1 oz Gold EC8 Grenada Coins are available to you for purchase with secure packaging. The gold bullion coins in this series are housed inside individual CertiLock cards. These cards feature a sealed capsule space at the center for the gold coin and come with Certificate of Authenticity information on each coin.

On the obverse of 2021 Gold EC8 Grenada Coins is a depiction of Queen Elizabeth II. This popular portrait of the Queen was created in 1998 and first used by the Royal Mint of England from 1998 to 2015. Created by Ian Rank-Broadley, the effigy shows the Queen wearing the Girls of Great Britain and Ireland Tiara, and is one of the most widely used in the history of her reign.

The reverse side of 2021 1 oz Gold Grenada Coins comes with an image of the national coat of arms. The Grenadian coat of arms was adopted by the nation in 1974 following is independence from Britain, though aspects of its English past remain a part of the design. The spade shield is quartered with passant guardant lions in the first and fourth quadrants and the crescent moon with lilies in the second and third quadrants. The shield is supported on either side by an armadillo and a pigeon.

Please contact Silver.com if you have any questions. Our team is available to you on the phone at 888-989-7223, online using our live chat, and via our email address.